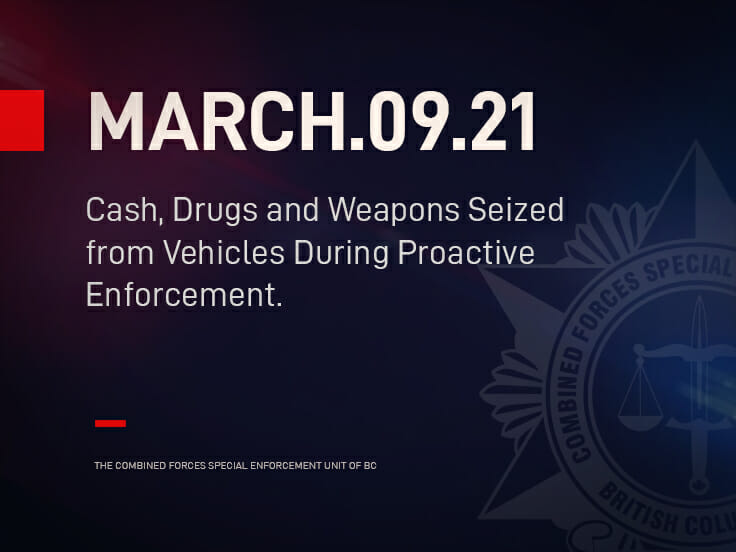 Drugs, cash, weapons and other items believed to be associated with street-level drug trafficking and gang activity, was seized after officers from the Combined Forces Special Enforcement Unit – British Columbia’s (CFSEU-BC) Uniform Gang Enforcement Team (UGET) were conducting proactive enforcement patrols over the past several days.

On the evening of February 27th, 2021, UGET officers were conducting regular proactive enforcement patrols in the area of Bentley Rd and King George Blvd, in the City of Surrey, when they observed a black Ford pickup that caught their attention due to motor vehicle act infractions. Officers conducted a vehicle stop that resulted in the seizure of approximately 5 grams of suspected cocaine, over $10,000 in Canadian currency, 2 tasers, 2 collapsible batons, and multiple knives. Both the female and male occupants of the vehicle were arrested for drug-related offences and are believed to be involved in the local drug trade. Criminal charges are being considered.

On the evening of March 5th, 2021, UGET officers were conducting proactive enforcement patrols in the area of 132nd Avenue and 100th Street, in the City of Surrey, when they observed a black Chevrolet Equinox conduct several motor vehicle act infractions. When officers attempted to initiate a vehicle stop, the driver fled from police. UGET officers immediately pulled over and did not engage in a pursuit. Officers were able to communicate over police radio the description of the vehicle and direction of travel and with the help of the RCMP Air 1 helicopter, which happened to be in the area, the vehicle was safely tracked into south Surrey where Surrey RCMP’s Community Response Team (CRU) successfully deployed a spike belt, bringing the Equinox to a stop. With the additional assistance of the Lower Mainland Integrated Police Dog Services (IPDS) the male and female occupants were arrested after trying to run from the vehicle. UGET officers, upon search of the vehicle, located a loaded shotgun. The Surrey RCMP took conduct of this investigation, as the male occupant was also in breach of multiple probation orders.

“Our UGET officers work on a daily basis to prevent on-going gang violence using suppression, disruption and enforcement action through a visible, proactive presence in the community,” says Sergeant Brenda Winpenny, Media Relations Officer for CFSEU-BC. “These two incidents are further examples of how UGET fulfills the CFSEU-BC’s mandate by supplementing police efforts in communities across the province and targeting those people who would cause the greatest risk to public safety.”