The CFSEU-BC’s mandate is to target, investigate, prosecute, disrupt, and dismantle the organized crime groups and individuals that pose the highest risk to public safety due to their involvement in gang violence

The Combined Forces Special Enforcement Unit of British Columbia is British Columbia’s “integrated anti-gang police agency”. The CFSEU-BC is the largest integrated police program in Canada, made up of members from every police department in B.C., including the RCMP, and are the third largest police ‘force’ in the province with over 400 officers. 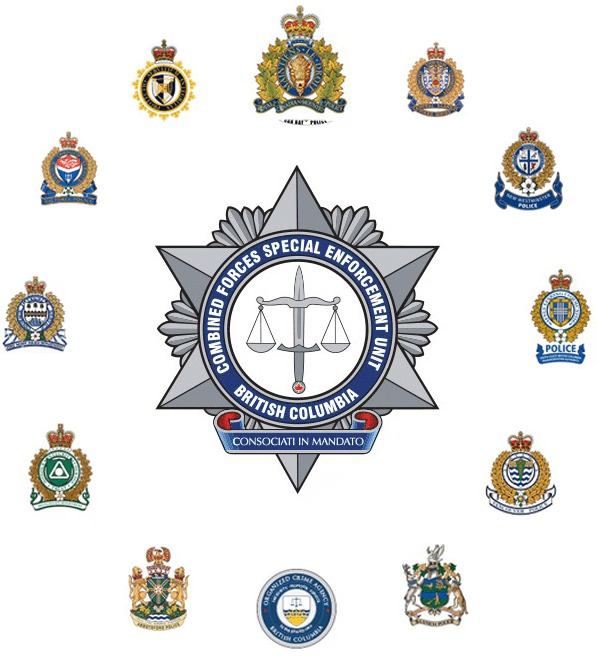 Gang violence and organized crime is a priority in the province of BC 2008-2009 saw a spike in gang murders, as the Lower Mainland was in the midst of a gang war. Since then, however, those numbers have steadily declined. 2014 saw the lowest number of gang homicides in BC history. These historical lows can be attributed to the hard work of all the CFSEU-BC employees, the proactive enforcement that is conducted daily, and the development of new and innovative analytical tools in order to not only target prolific offenders but to stem the violence.  CFSEU-BC is on the cutting edge of a modernized policing model.

This provincially funded integrated approach was intended to improve coordination of the province’s response to the growing concern over violent organized crime and gangs as well as their associates. But it was not until 2009 that CFSEU-BC, as it is known today, was established. Under the direction of the provincial and federal governments, CFSEU-BC expanded to include the OCABC, and the British Columbia Integrated Gang Task Force.

CFSEU-BC opened branch offices in Prince George covering all of Northern BC and in Kelowna covering southeast BC which these offices added to the already established district office in Victoria which services Vancouver Island. All CFSEU-BC offices are now under one single command structure.

The CFSEU-BC is headquartered in Metro Vancouver, based out of the RCMP “E” Division Headquarters. Through coordinated efforts in all our offices, CFSEU-BC is fully and successfully represented through the province.

CFSEU-BC is made up of seconded police officers from the 14 different municipal agencies in BC:

CFSEU-BC is governed by an OCABC Board of Directors that includes RCMP, provincial and municipal law enforcement representatives

Other partners include the Canadian Association of Chiefs of Police and the International Association of Chiefs of Police, as well as the Organized Crime Agency of British Columbia (OCABC). OCABC is a fully independent and designated police agency within the Province of British Columbia. All OCABC employees are fully integrated and are an integral part of the CFSEU-BC. The OCABC mandate is to facilitate the disruption and suppression of organized crime in BC.

One of the highlights of CFSEU-BC is how it has leveraged relationships with its 14 partner agencies to be a leader in integration. CFSEU-BC has demonstrated excellence in partnering with many police agencies to aggressively tackle and compliment local resources in targeting those that pose the greatest risk to public safety. Due to this level of collaboration, CFSEU-BC continues to be very proactive and progressive in the fight against gang violence.

The CFSEU-BC, while conducting its own investigations into those who post the greatest risk to public safety due to gang violence, plays a vital support role to police agencies in BC and beyond, frequently collaborating with law enforcement agencies across the country and around the world. The integrated approach enhanced coordination and strategic deployment against violent threats posed by organized crime groups and gangs in BC, Canada, and abroad. CFSEU-BC’s presence in communities across British Columbia sends a message to those who benefit from and are responsible for these crimes and the violence that occurs it is our intention to hold those individuals accountable for their actions and keep the citizens of BC safe.