A pillar of effective policing and community safety is strong prevention, education, and public engagement. CFSEU-BC continually seeks to foster and promote conversations about gangs. Whether it is through traditional media releases or by engaging people on Social Media, these conversations are critical to educating people about gangs and informing the public what CFSEU-BC is doing in communities across British Columbia. 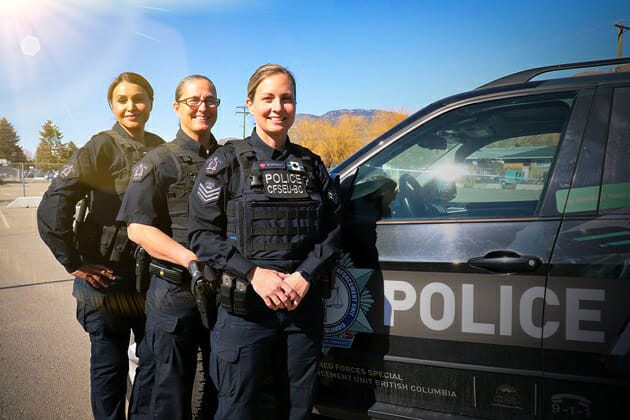 Sgt. Brenda Winpenny with CFSE-BC’s Gang Intervention & Exiting Team. The Gang Intervention Team is responsible for providing gang intervention support across British Columbia. They work with high risk individuals who are either engaged or at-risk of engaging in gang activities.

Sergeant Brenda Winpenny has been a police officer with the RCMP since 2000 and the Media Relations and Community Affairs Officer for the Combined Forces Special Enforcement Unit of British Columbia (CFSEU-BC) since early 2017.

Sgt. Winpenny has worked in a number of RCMP detachments in British Columbia as well as serving time in a Federal investigative unit, conducting large scale drug and organized crime investigations. She has extensive experience addressing and implementing solutions to complex community issues as well as previously serving in the role of an RCMP Detachment spokesperson. Brenda has developed strong relationships with media, policing partners and key community stakeholders.

Sgt. Winpenny also manages the day to day operation of the CFSEU-BC “End Gang Life” gang prevention, education and awareness campaign. Sgt. Winpenny continually seeks new and innovative ways to promote positive policing initiatives and engage the public and is often in the community and schools speaking about the CFSEU-BC, gangs, and gang prevention.

I look forward to continue building on the relationship the CFSEU-BC has with the media and will also provide support, awareness, and gang prevention to students, stakeholders, and law enforcement partners within the community.

The CFSEU-BC’s Community & Public Affairs team uses traditional media, social media, and a variety of mediums to reach out to people in all corners of the community including teenagers, young adults, men, women, at-risk youth, parents, teachers, police, front line workers, and policy makers. From the End Gang Life initiative website, to Twitter and Facebook, engaging the public in conversation about gangs and gang violence is extremely important…no matter how it is done.