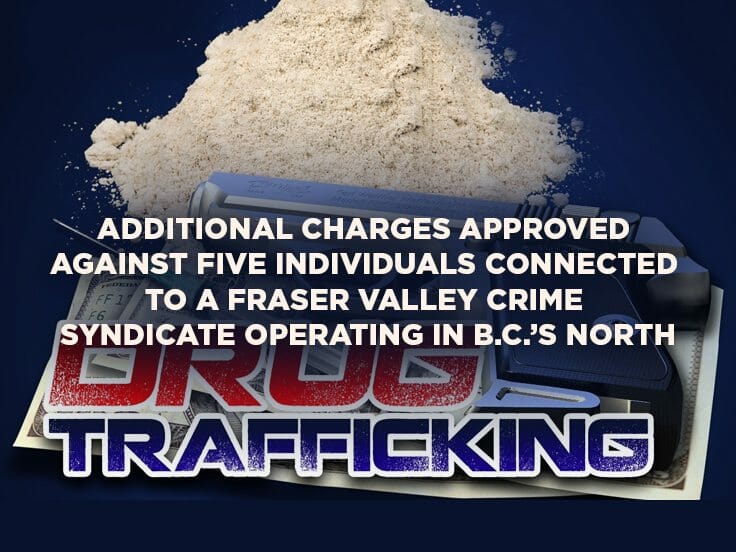 ***Update – Morrisey has been located, arrested, and is currently out of custody on a recognizance. ***

More charges have now been approved against five individuals involved in a 2014 Combined Forces Special Enforcement Unit of British Columbia (CFSEU-BC) investigation into the alleged drug trafficking activities of a Fraser Valley crime cell operating primarily out of B.C.’s north. The investigation resulted in the arrests of several people and the seizure of millions of dollars worth of illegal and potentially deadly drugs.

In February 2015, the CFSEU-BC executed search warrants on two properties in Chilliwack and arrested four males and one female. The search of two residences and three storage lockers resulted in the seizure of eight firearms, prohibited magazines, silencers, and more than $200,000 in cash. Also seized was over $2 million dollars worth of drugs, which included a large quantity of the dangerous drug Fentanyl. See original release.In December of 2015, Crown Counsel approved charges against three of the men originally arrested in connection to this investigation. See original release. On February 15, 2016, Federal Crown Counsel has approved a total of 50 more criminal charges against five additional men arrested in this investigation.

Charges have been approved against Jordan Anthony Ramos, a 26-year-old from Chilliwack. Ramos is charged with four counts of possession for the purpose of trafficking. He is currently in custody in Grand Prairie, Alberta on unrelated charges.

22-year-old Lucas Benjamin Thiessen, from Chilliwack, is charged with four counts of possession for the purpose of trafficking.

25-year-old Kyle Harrower, from Chilliwack, is charged with five counts of possession for the purpose of trafficking.

Arrest warrants have been issued for both Lucas Thiessen and Dana Schaper-Kotter. It is currently unknown where Theissen and Schaper-Kotter are and anyone with information is asked to contact your local police or contact CrimeStoppers at 1-800-222-8477.

Darcy Horvath, who is currently in custody, will be appearing in Chilliwack Provincial Court on February 18th, 2016 at 10 am.

“This investigation crossed the province and required a sustained and collaborative effort by our investigators,” says Chief Superintendent Kevin Hackett, Chief Officer of the CFSEU-BC. “We remain steadfast and committed to relentlessly pursuing those who wish to bring harm to our communities regardless of where they are.”

“Fentanyl is an extremely dangerous drug that is proving to have widespread consequences in our province,” said Minister of Public Safety and Solicitor General Mike Morris. “These latest arrests show that organized criminal groups don’t just operate in the Lower Mainland – their influence spans British Columbia. These arrests also highlight the importance of B.C.’s integrated teams like CFSEU-BC working together province-wide to ensure those who deal in drugs and all of the criminal activity that goes along with it are brought to justice.”