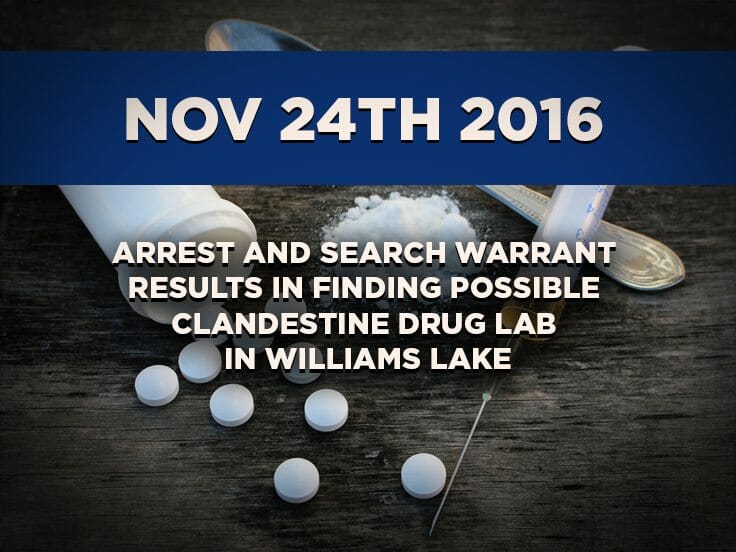 One person is in custody and the RCMP’s Federal Clandestine Laboratory Enforcement and Response (CLEAR) Team has been called in to support an investigation led by the Combined Forces Special Enforcement Unit of British Columbia’s (CFSEU-BC) North District office after a man was arrested and the CFSEU-BC executed a search warrant on a residence in Williams Lake late yesterday evening.

Over the past year, investigators with the CFSEU-BC’s North District office have targeted numerous individuals and groups allegedly involved in the drug trade in the Cariboo/Chilcotin, Williams Lake, and Quesnel regions with the intent of disrupting gang activity and associated violence. These investigations have resulted in numerous previously announced arrests, drug and firearms seizures.

A continuation of this focused enforcement over the past month has been the investigation into a 20- year-old Williams Lake man and his alleged drug trafficking in the Williams Lake area. Yesterday evening the investigation culminated with the man being arrested and a small amount of what is suspected to be cocaine seized following his arrest.

A search warrant was obtained for the man’s Williams Lake residence, located on Windmill Crescent. Inside the residence, the CFSEU-BC’s investigators located an estimated one kilogram of cocaine, an unknown quantity of suspected methamphetamine, two loaded handguns, two semi-automatic rifles, ammunition, a homemade firearm sound suppressor, edged weapons, thousands of dollars in cash, and drug paraphernalia.

As officers were searching the basement of the residence, they also discovered substances and paraphernalia consistent with what is believed to be an illegal synthetic drug lab. A preliminary risk assessment was conducted by an investigator who determined the lab was not currently in use, but contact was immediately made with the RCMP’s Federal CLEAR Team, a specialized federal police unit responsible for dismantling clandestine drug laboratories that supports police agencies across the province.

The 20-year-old man who was arrested remains in custody, but charges have not yet been laid.

The CFSEU-BC would like to thank the Williams Lake RCMP and the RCMP’s Federal CLEAR Team for their assistance during this most recent phase of the investigation.

7 hours ago by CFSEU-BC Communications Strategist 33

8 days ago by CFSEU-BC Communications Strategist 127