The Vancouver Island team of the Combined Forces Special Enforcement Unit of British Columbia has arrested two men believed to be high-level drug traffickers with a history of violence. 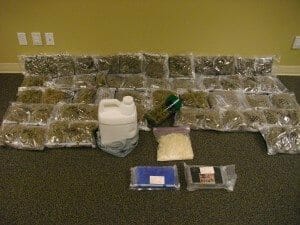 One of the men, a 37-year-old from Langford, is well-known to police for his involvement in the drug trade and association to individuals involved in organized crime on Vancouver Island. 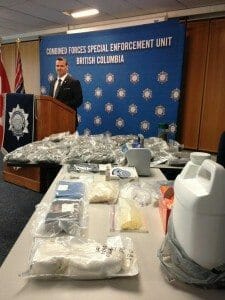 “These guys are not bit-players in the Vancouver Island gang environment,” says CFSEU-BC spokesperson Sgt. Lindsey Houghton. “They are significant drug traffickers who have a history of violence including charges for robbery and assault and they’ve frankly had a very negative public safety impact on Vancouver Island.”

The home on Claude Road where one of the searches took place was in a highly-populated area. “This residence was located in a neighbourhood full of families. Anytime, we have this kind of serious public safety issue in your neighbourhood we are going to do everything in our power to disrupt that gang activity and the violence associated with it,” Sgt. Houghton says.

The group is alleged to have ties to Lower Mainland drug networks.

Police seized 2 kilograms of cocaine, 28 pounds of marijuana, 10 litres of the date-rape drug GHB, 200 ecstasy pills and 1 kilogram of crystal methamphetamine. All combined, the drugs had an estimated street value of $542,000. Additionally, one pound of a white powder believed to be a “cutting agent” was seized as well as large weigh scales commonly used for weighing drugs. Investigators also seized ammunition and a shoulder gun holster. 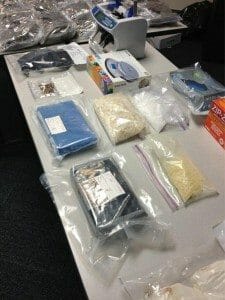 During the search, investigators found a Health Canada medical marijuana growing operation at one of the locations and they are now determining if that growing operation complies with the terms of the licence.

“These results speak to the high degree of cooperation amongst law enforcement agencies all across our province”, states Superintendent Jim Faulkner, the Assistant District Officer for the Vancouver Island RCMP. “Combined forces operations have shown time and again that when law enforcement agencies share intelligence, resources, and expertise, criminal organizations suffer.”

Drug charges against the 37-year-old Langford man and a 27-year-old Saanich man are pending.