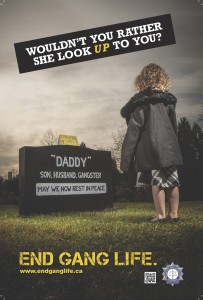 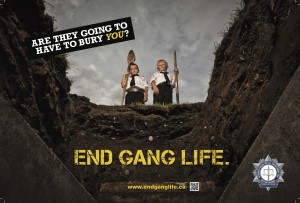 This visually impactful gang prevention and education campaign will use bold, engaging, and powerful imagery and language which speaks to people and will hopefully give youth a fresh perspective on what gangs really are, give communities a rallying point around which they can mobilize against gangs in their neighbourhoods, and make gangsters pause for a second thought about their life choices.

“This campaign represents a critical step in the evolution of B.C.’s relentless fight against gangs and organized crime,” said Anton. “The messages are engaging, clear, and simple yet powerful. They will reach those with loved ones who are involved in gangs and organized crime, and foster important conversations that may help those young people to stay or get out of gang life. That’s critical to reducing the street violence that continues to threaten public safety in many B.C. communities.” 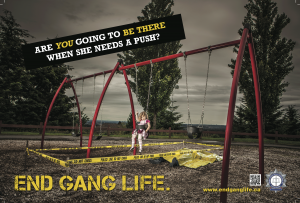 This campaign, which is expected to last approximately two years, is a component of CFSEU-BC’s ongoing and expanding public outreach and education efforts to bring attention to gangs and stimulate discussion about gangs, as well as demystify and eliminate misperceptions about gangs. The campaign will be targeting everyone from youth, parents, siblings, peer groups, members of communities across B.C., and gang members and their friends and families – because gang violence and organized crime affects everyone.

“Even though gang-related murders are at some of their lowest levels in recent years, even one murder is one too many and that is why we think there is no better time than now to create and release British Columbia’s most comprehensive, engaging, and impactful anti-gang public service announcement media campaign in this province’s history,” says Chief Superintendent Dan Malo, Chief Officer for the Combined Forces Special Enforcement Unit of British Columbia. “It is time that mothers and fathers stop having to arrange for their child’s funeral and no family should have to grieve for the loss of their loved one because of gang violence.”

“From the outset, I wanted to create a visually impactful and comprehensive gang prevention campaign that touched people emotionally and will hopefully act as a catalyst for communities across British Columbia to stand up to gangs and gang violence,” says CFSEU-BC Media Relations Officer Sergeant Lindsey Houghton. “I’m excited to say that in the coming months people will see and hear about more gang prevention and education initiatives from CFSEU-BC and with the support from the public and media throughout this campaign, we can all play a part to “end gang life” in British Columbia.”

Beginning today, anyone can visit www.endganglife.ca, which is linked to CFSEU-BC’s website (www.cfseu.bc.ca), and be taken to a specially created webpage where they can access and download posters, videos, and radio public service announcements along with information about gang prevention research, creating resiliency in youth, Crime Stoppers, and CFSEU-BC’s award winning 2013 Community Report.

Also on the page are links to the B.C. government supported Youth Against Gang Violence Line – a 24/7 multilingual helpline at 1-800-680-4264, where all calls are confidential and anonymous, and the province’s newly released Youth Gang Prevention Toolkit for Community Planning (http://www.pssg.gov.bc.ca/crimeprevention/publications/index.htm#gangs).

All of the campaign’s products are publicly available through www.endganglife.ca. Any media outlets who would like access to the posters, television, or radio public service announcements can contact Sergeant Lindsey Houghton or Ms. Geeta Reddy.

The 60 second television videos have received “Public Service Announcement” designation from the Television Bureau of Canada (Telecaster numbers: C7CM2YCN-1014/P/G/W/HD, CQCZ367P-1014/P/G/W/HD, and C9AYAQXE-1014/P/G/W/HD) and any broadcaster can contact CFSEU-BC for the videos.