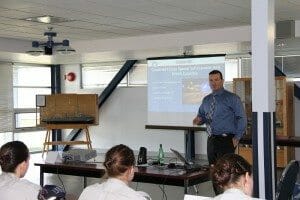 Sgt. Lindsey Houghton spent last weekend in the Comox Valley as an invited guest speaker at the RCMP Youth Camp where he did some myth-busting about the reality of gang life. CFSEU-BC research shows that many gangsters who are the victims of homicide are most likely to lose their lives at the age of 30. They also experience isolation from family members and longtime friends who are not living the gang life. “It’s important to demystify (the issue) and get down to the facts,” says Sgt. Houghton. “It sounds clichéd, but (the kids) are our future police officers, educators, journalists and businesspeople.” Sgt. Houghton also took some time to speak with a local reporter at the Comox Valley Record.

As the province’s anti-gang agency, CFSEU-BC works closely with municipal and RCMP detachments to combat gang and organized crime violence.

6 hours ago by CFSEU-BC Communications Strategist 29