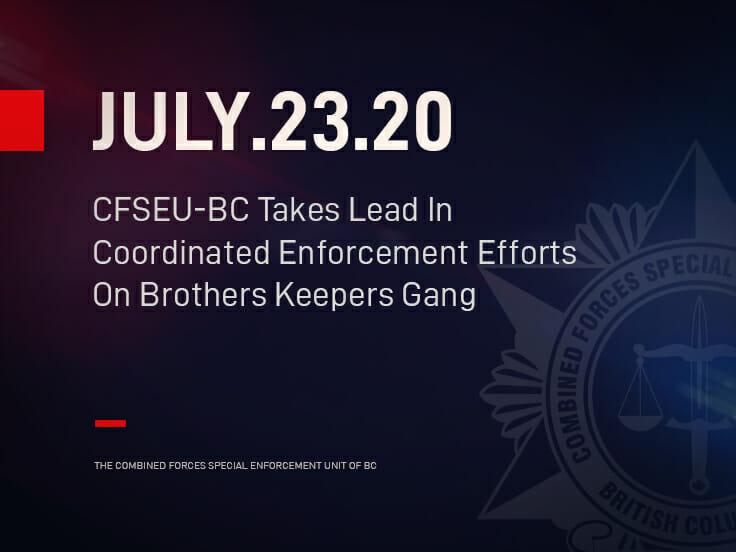 In 2018, as a result of an increase in gang-related violence in the Lower Mainland and across British Columbia involving an emerging gang calling themselves the “Brothers Keepers”, the Combined Forces Special Enforcement Unit of British Columbia (CFSEU-BC) led the creation of a task force dedicated to conducting strategic and targeted disruption, suppression, and enforcement of the Brothers Keepers activities.

With advanced targeting through the Provincial Tactical Enforcement Priority (PTEP), the CFSEU- led Brothers Keepers Task Force helped coordinate and enable investigations not only at CFSEU-BC, but also in numerous other jurisdictions across British Columbia that targeted the Brothers Keepers and their drug trafficking networks, including synthetic opioid distribution and violent gang activities.

While the number of core members may only be about a dozen, their network of 194 people, highlights the reach the Brothers Keepers has. As their network grows, as is the case with other gangs, it increases their potential to recruit and expand outside of the Lower Mainland and British Columbia, demonstrating why it is important for the group to be targeted by law enforcement in order to disrupt this growth and criminal expansion. 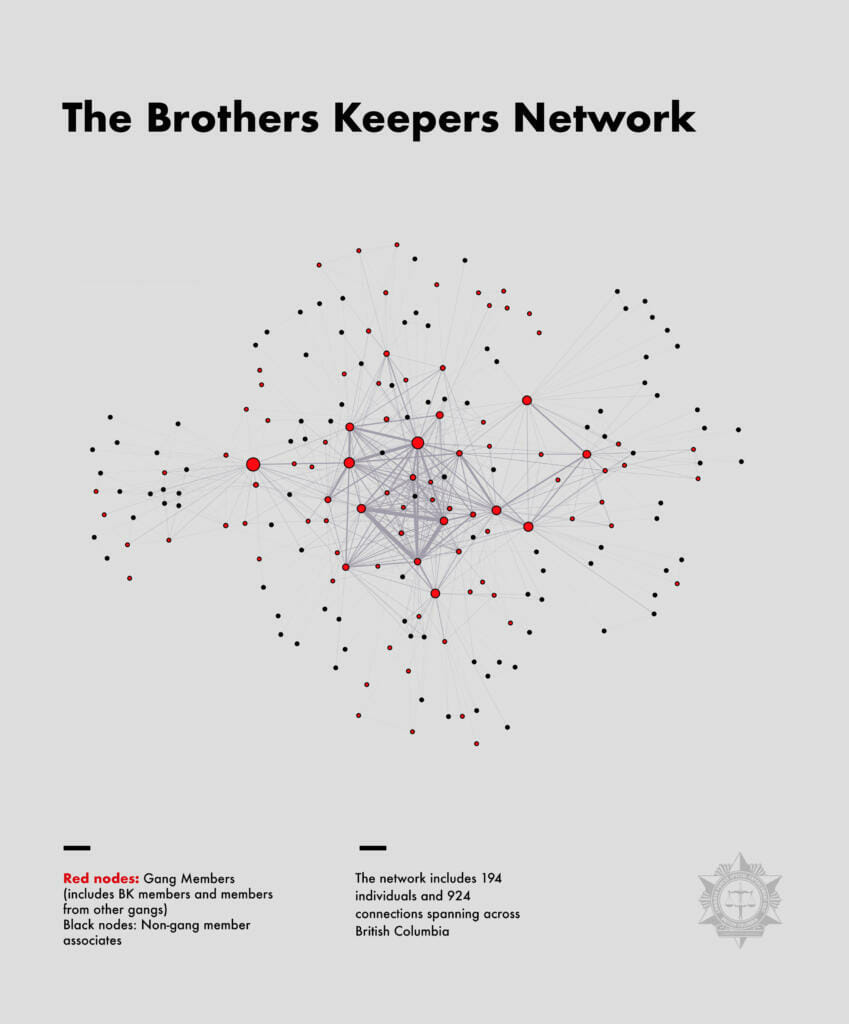 The Task Force has also been able to collect intelligence and information, previously unknown, about the Brothers Keepers. It was through these efforts and the collaboration with police partners, that the CFSEU-BC has been able to determine that the Brothers Keepers and their criminal network not only spread to all corners of British Columbia, but expanded its territory and network to Alberta and Ontario. However, throughout the expansion efforts of the Brothers Keepers, our task force was successful in disrupting their intended expansion into the Nanaimo area of Vancouver Island.

The Brothers Keepers first emerged within the British Columbia gang landscape in 2017 and were immediately in direct conflict with rival gangs such as the Red Scorpions, the Wolfpack, the Hells Angels, the United Nations, and numerous other individuals and groups. This conflict resulted in violence manifesting on streets and in communities across the province

In early 2018, CFESU-BC began to monitor and coordinate the Province-wide investigative efforts into the Brothers Keepers. Since that time, 259 collective law enforcement interdictions have taken place on gang members and affiliates across 21 jurisdictions in British Columbia. These interdictions range from motor vehicle act offences to advanced organized crime projects.

Over 30 kgs of suspected fentanyl, methamphetamine, heroin and cocaine have been seized. In terms of the potential harm to British Columbians that these drugs would have caused, had they hit the streets, it is estimated that by seizing these drugs the CFSEU-BC, and its policing partners, may have prevented tens of millions of lethal doses.

The factors and contributing motives for gang-related violence are complicated, ever changing, and hard to attribute without being able to verify information that is too often not told by gang members to the police. The CFSEU-BC’s researchers and intelligence analysts are analyzing the information captured since the creation of the Task Force. The data indicates there has been a 38.5 % decrease in combined gang-related homicides and attempted homicides from Jan 2017 to Dec 2019. Researchers at CFSEU-BC, in collaboration with our policing partners across the province, continue to examine how the decline, may be attributed to the coordinated and sustained efforts targeting the Brothers Keepers and our efforts to reduce gang- related harm in our communities.

The Brothers Keepers have continued their operations since the start of the COVID-19 pandemic, this despite the restrictions that have been put in place around travel and non- essential work and the sacrifices that hundreds of thousands of British Columbians have made to ensure they, their loved ones, and our communities remain safe and healthy. Crime does not quarantine and neither have the Brothers Keepers.

“This multi-year collaborative effort led by CFSEU-BC, with funding from the Province of British Columbia through its support of the Provincial Tactical Enforcement Priority initiative and dedicated funding of investigative teams, like the CFESU-BC’s Anti-Trafficking Task Force, has been able to not only unveil the anatomy of the Brothers Keepers, but allow us, and our partners, to focus disruption and enforcement efforts so they have the greatest chance of impact, “ says Superintendent Paul Dadwal, CFSEU-BC’s Operations Officer. “We remain committed to targeting those who pose the greatest risk to public safety due to their involvement in gang-related activities and policing in British Columbia is unified in its resolve to suppress, disrupt, and prevent groups like the Brothers Keepers who show such wanton disregard for the well-being of Canadians.”

“Criminal groups and gangs like the Brothers Keepers continue to try and expand their illicit activities throughout the province and beyond BC’s borders. While the combined efforts thus far have resulted in the Brothers Keepers being significantly disrupted, we remain determined to continue our targeting of their, and other criminal networks, illegal activities,” says Assistant Commissioner Michael LeSage, CFSEU-BC’s Chief Officer. “Over the course of the past two years, numerous RCMP jurisdictions and municipal police agencies have been in collaboration with, and supported by, CFSEU-BC. A coordinated, integrated, and strategic approach to disrupting the potentially tragic and devastating impacts of their crimes, with deadly drugs like fentanyl, is critical to our collective efforts of keeping our communities safe.”

The CFSEU-BC would like to acknowledge and thank the many RCMP detachments, municipal police departments and investigative units across British Columbia, the Correctional Service of Canada, British Columbia Corrections, B.C. Sheriffs Service, the Integrated Homicide Investigations Team, Canada Border Services Agency, and others for their ongoing commitment to reducing the threat that groups like the Brothers Keepers pose to British Columbians.

7 hours ago by CFSEU-BC Communications Strategist 36