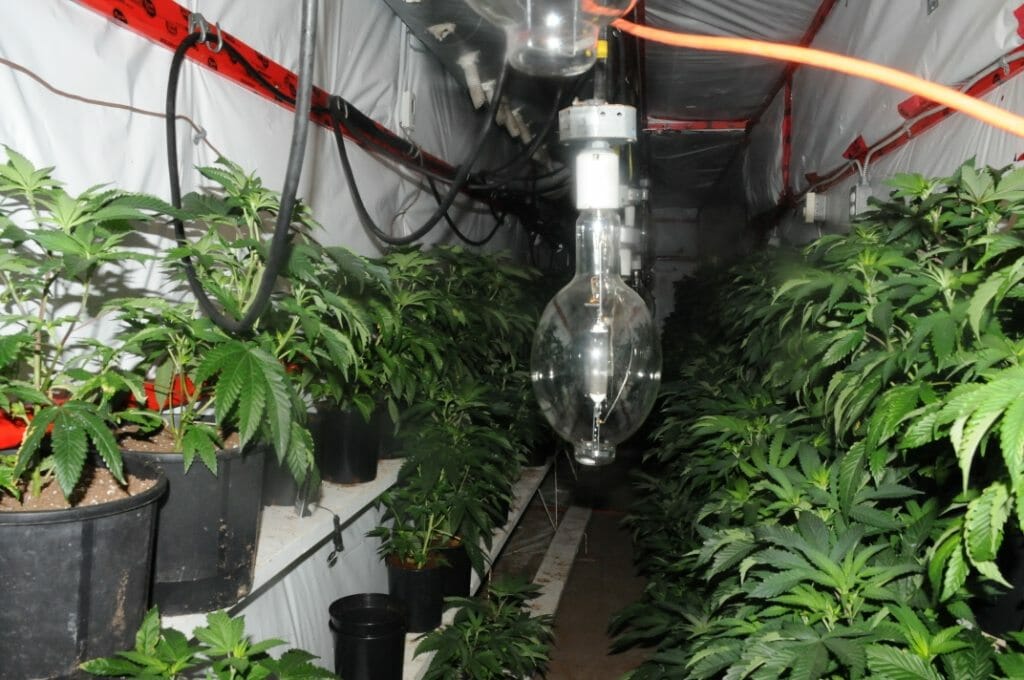 CFSEU-BC has executed a warrant at a second underground marijuana growing operation in as many months, this time at a property in the 27000-block of 56th Avenue in Langley over the weekend.

On June 1, 2013, investigators executed the warrant and arrested three men and one woman at the scene. They were later released pending further investigation. 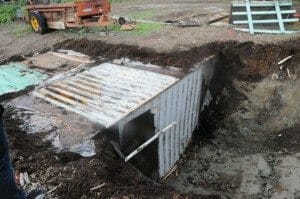 A search of the property revealed five shipping containers buried underground where they housed a sophisticated bunker system, similar to what was seen at the underground bunker in Mission that was disguised as a fake horse paddock. In this case, however, the property above the bunker was constructed to resemble a small hobby farm, complete with three sheep and one pig. In addition to the farm animals, a combination of about a dozen pit bull-type dogs and Chihuahuas were found. The dogs were taken by a family member of one of the people arrested.

Each of the steel shipping containers had a doorway cut through it to make a continuous pathway that connected all of the containers as well as raised walkways so workers could easily walk through the bunker from container to container. 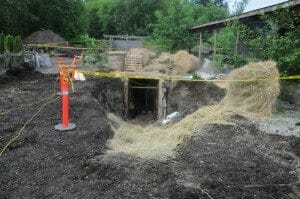 The grow-op, which is believed to have been operating for at least a couple years, was powered by an industrial-sized natural gas generator, similar to what was found in Mission, worth an estimated $100,000. To fuel the underground generator and further conceal the operation from the public and police, it was discovered, to the shock of the officers, that a nearby natural gas pipeline had been cut into and a bypass installed to redirect the gas to the generator.

As was the case in Mission, the perpetrators went to great lengths to conceal what they were doing. At the Langley property, the generator’s muffler was disguised from view with an old manure spreader placed over top of the muffler.

In addition to the four people arrested, officers discovered a loaded firearm in one of the bedrooms of the house on the property and seized about 1.5 pounds of dried marijuana. 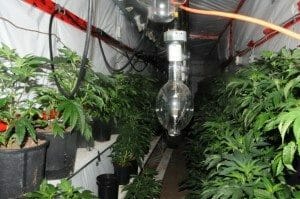 “From trucking the containers in on flat-bed trailers, to excavating massive holes, to needing a crane to lower the containers into the ground, and then having people get the grow-op up and running, this was a complex operation that required a great deal of planning and equipment. Make no mistake; however, this had the potential to be extremely dangerous to the public and emergency responders,” says CFSEU-BC spokesman Sgt. Lindsey Houghton. “The lengths that the people constructing these types of grow-ops will go to are alarming. In spite of their efforts to hide from the police, however, we will continue to target organized crime groups and those people who are the most violent in our communities and how they get their money to further their criminal enterprises.”

CFSEU-BC was at the property over the weekend due to the size and complexity of the operation. A crane operator had to be hired to lift the containers and generator out of the ground. “We relied heavily on the cooperation and assistance of contractors and heavy equipment operators, and the Langley Fire Department to help us at the scene,” Sgt. Houghton said.

CFSEU-BC acknowledges the significant assistance it received from the Langley and Surrey RCMP detachments, the Lower Mainland Emergency Response Team, RCMP Air Services, and private contractors during the execution of this search warrant.