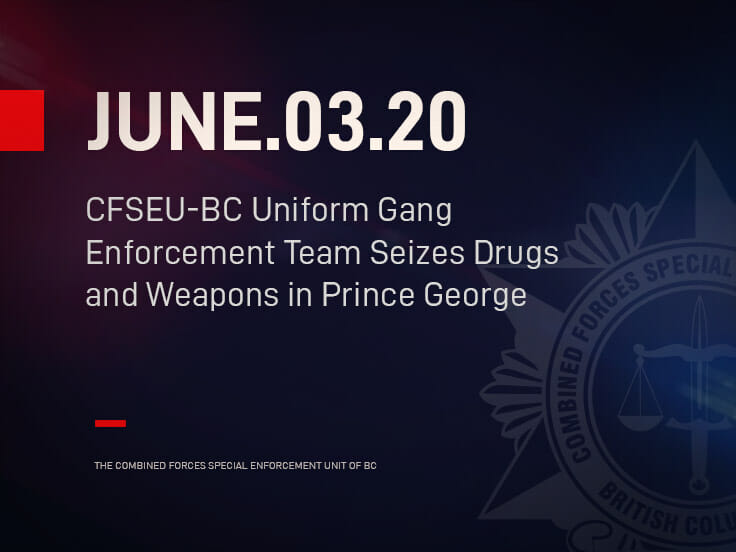 Previous item One Man Arrested After... Next item Drugs And Vehicle Seized...

Last week, members of the Combined Forces Special Enforcement Unit of British Columbia’s (CFSEU- BC’s) Uniform Gang Enforcement Team (UGET) were deployed to Prince George. By conducting active and high visibility enforcement in the community, including on those individuals or groups that may be posing the greatest risk to public safety due to their involvement in gang or organized crime activity, UGET was able to contribute to overall law enforcement efforts and enhanced public safety.

Last week, UGET worked in partnership with the Prince George RCMP to ensure that the team was briefed on local crime hot spots and received up-to-date intelligence to help direct their enforcement activities while in Prince George.

Over the four days that UGET was in Prince George, 125 vehicles were stopped and 165 people were checked, with the majority of those people connected to the street-level drug trade. Of concern to overall public safety was the seizure of a loaded SKS rifle with ammunition located inside a vehicle along with other items associated with criminal activity. 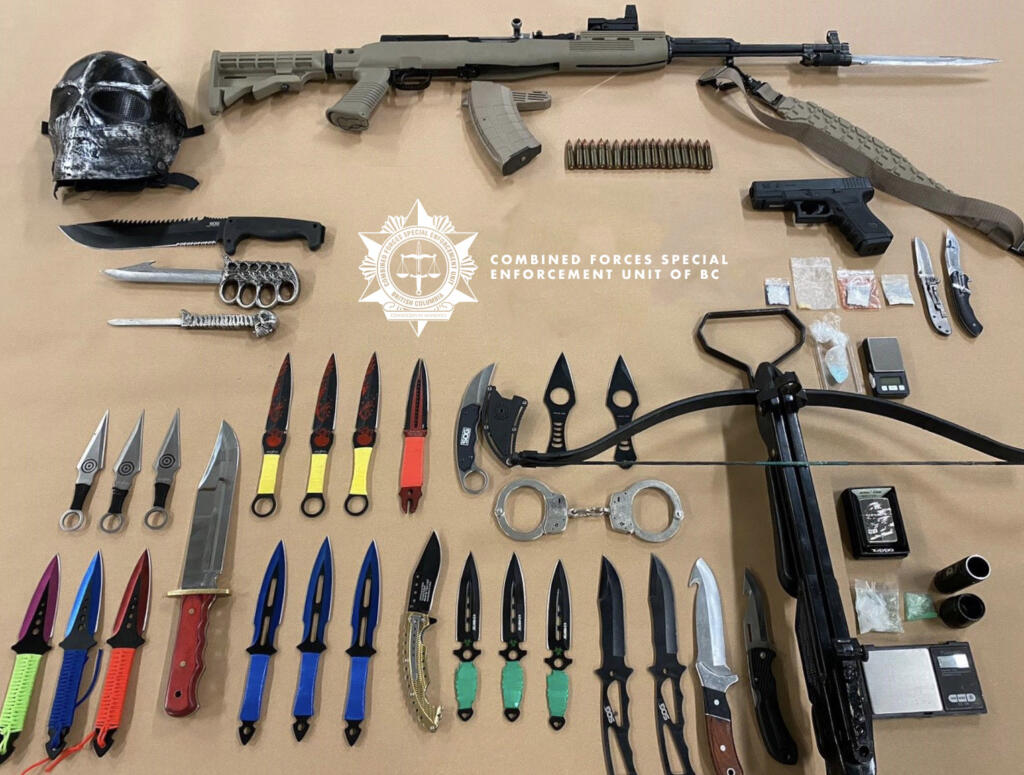 Also, while conducting targeted enforcement, members of the CFSEU-BC UGET team witnessed a stabbing. Officers immediately intervened to stop the assault, called for medical assistance for the victim and apprehend the suspect. Taking weapons off the street and out of the hands of those involved in the drug trade, as well as intervening in violent acts, was vital to the UGET violence and gang-related suppression efforts while in Prince George.

During their time in Prince George, UGET members seized, one can of pepper spray, handcuffs, a loaded SKS semi-automatic rifle with ammunition, various other ammunition, knives of various types, including one with attached brass knuckles, a crossbow, one imitation handgun and one BB gun resembling a handgun.

“One of the core aspects of the overall CFSEU-BC enforcement strategy are the Uniform Gang Enforcement Teams (UGET),” says Sergeant Brenda Winpenny, CFSEU-BC Media Relations Officer. “UGET represents the overt, tactical and specialized uniform presence of CFSEU-BC which will directly interact with individuals involved in organized criminal activity to help our Agency deliver on our mandate. Providing UGET support to Prince George is a positive for the community and law enforcement.”

“We thank our partners from CFSEU-BC, UGET for their support and assistance in targeting members of violent organized crime groups in our community” says S/Sgt. Kent MacNeill, acting Operations Officer for the Prince George RCMP. “The deployment was successful and without a doubt, sent a message to these groups that we do not tolerate violence. We intend to extend an invitation to this team again very soon.”

Several firearms have been seized and three men arrested after officers from the Combined Forces Special Enforcement Unit – British Columbia (CFSEU-BC) conducted a search warrant of a residence in relation to a firearm trafficking investigation...

An illegally parked vehicle that was spotted by a member of the Combined Forces Special Enforcement Unit of British Columbia’s (CFSEU-BC) Uniform Gang Enforcement Team (UGET), led to the arrest of a man wanted on a Canada-wide warrant, along with...

Victoria, BC – A Joint Forces Operation (JFO) between VicPD’s Strike Force and the Combined Forces Special Enforcement Unit of BC (CFSEU-BC) has resulted in a $30,000,000 seizure of drugs, including high-concentration fentanyl, weapons, and cash...

Four men have now been charged after an illegal gaming investigation by the Combined Forces Special Enforcement Unit – British Columbia’s (CFSEU-BC) Joint Illegal Gaming Investigation Team (JIGIT) resulted in a search warrant on a business on...