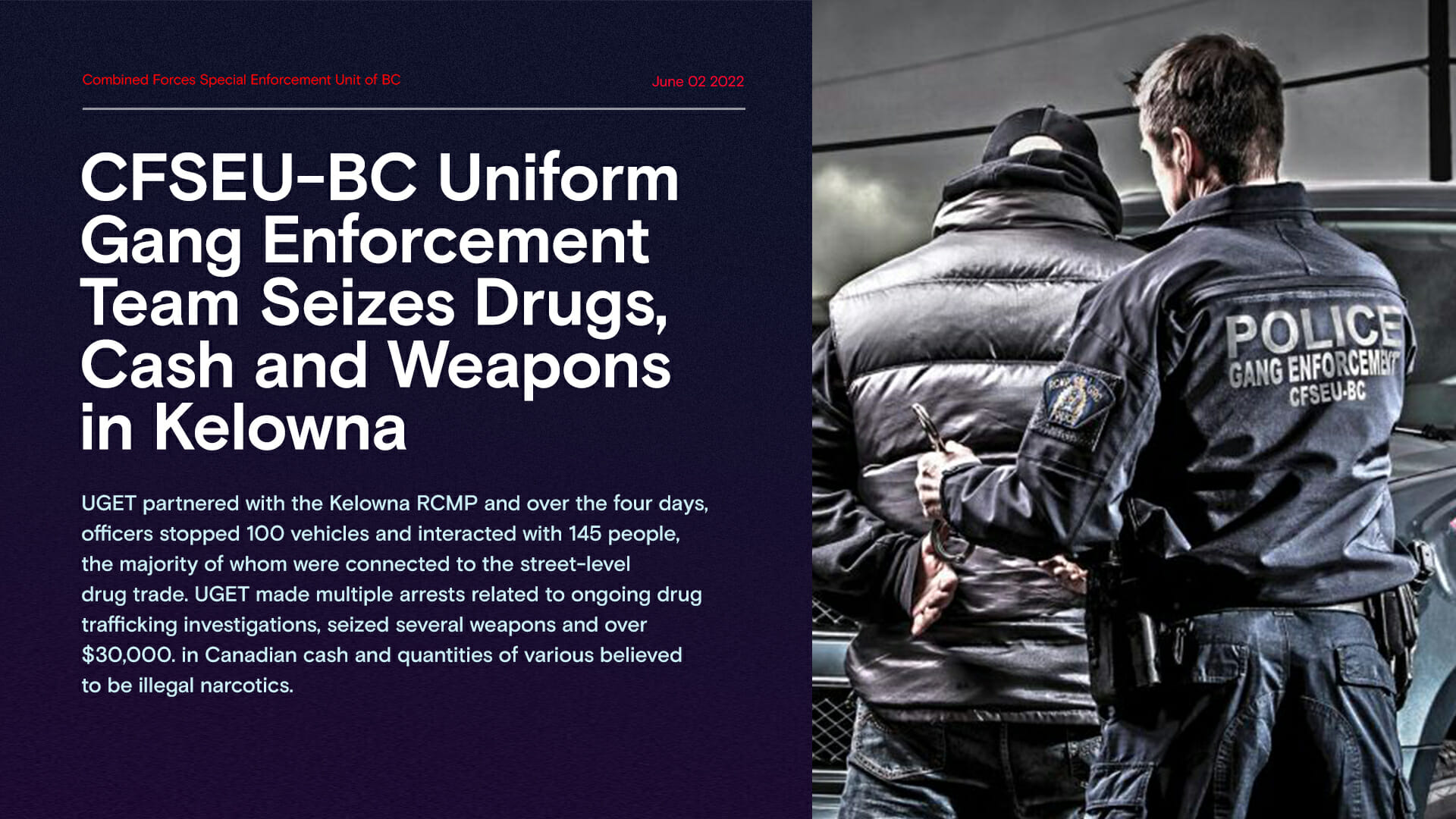 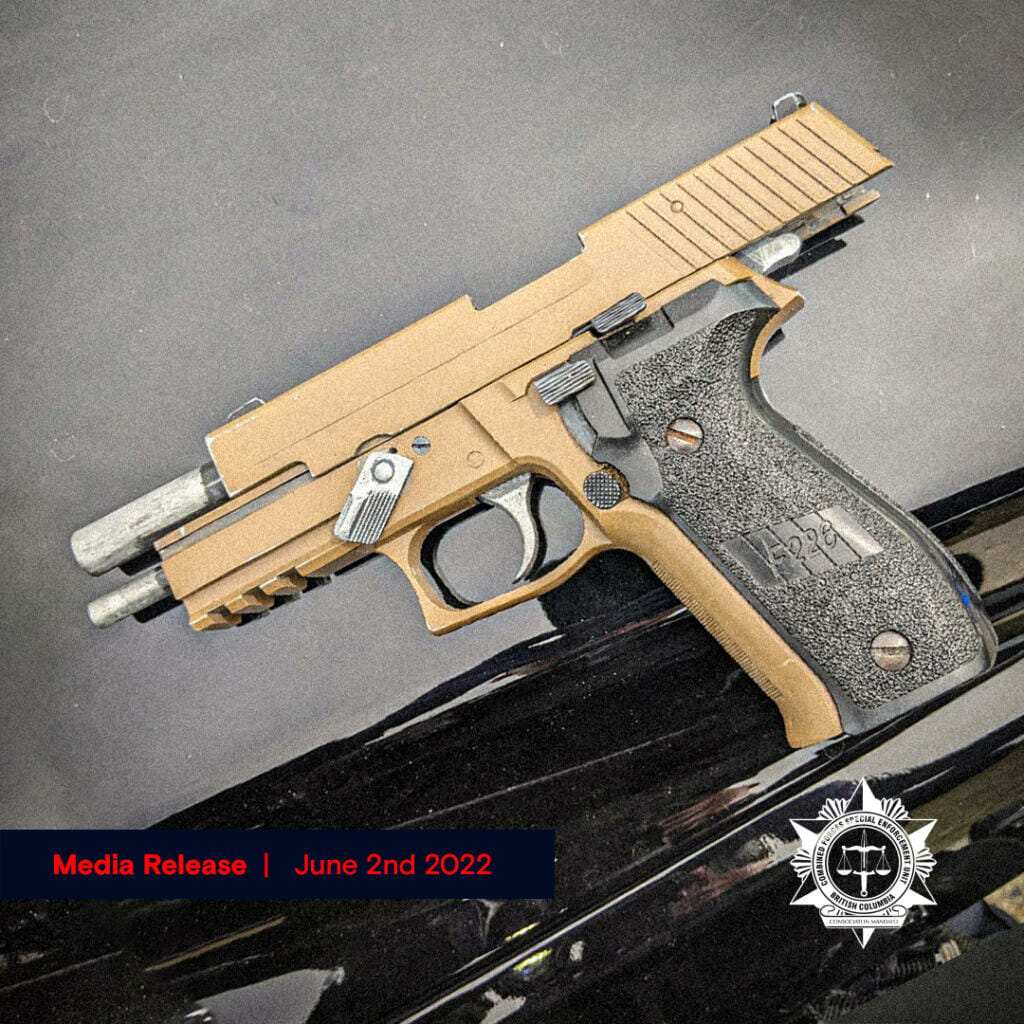 Members of the Combined Forces Special Enforcement Unit of British Columbia’s (CFSEU-BC’s) Uniform Gang Enforcement Team (UGET) were recently deployed to Kelowna to assist with the disruption and suppression of the street-level drug trade and the violence that can be associated. By conducting proactive and high visibility enforcement in the community against those individuals or groups that pose the most significant risk to public safety due to their involvement in gang or organized crime activity, UGET contributed to overall coordinated law enforcement efforts with the Kelowna RCMP.

While UGET is based in the Lower Mainland and deploys daily into local communities, the teams also regularly deploy to communities around the province, either proactively or reactively, to provide short- term support to police agencies.

UGET partnered with the Kelowna RCMP to ensure that the team was briefed on local crime hot spots and received up-to-date intelligence to help direct their enforcement activities.

Over the four days, officers stopped 100 vehicles and interacted with 145 people, the majority of whom were connected to the street-level drug trade. Of concern were the multiple weapons seized, including two BB guns that appeared altered to shoot live ammunition. Taking these potential weapons off the street was integral to the UGET violence suppression efforts in Kelowna.

The overall results of the UGET deployment are still in progress. However, UGET made multiple arrests related to ongoing drug trafficking investigations, seized several weapons and over $30,000. in Canadian cash and quantities of various believed to be illegal narcotics.

UGET officers also located a stolen vehicle and arrested the occupant on a warrant for a Robbery committed in Penticton. 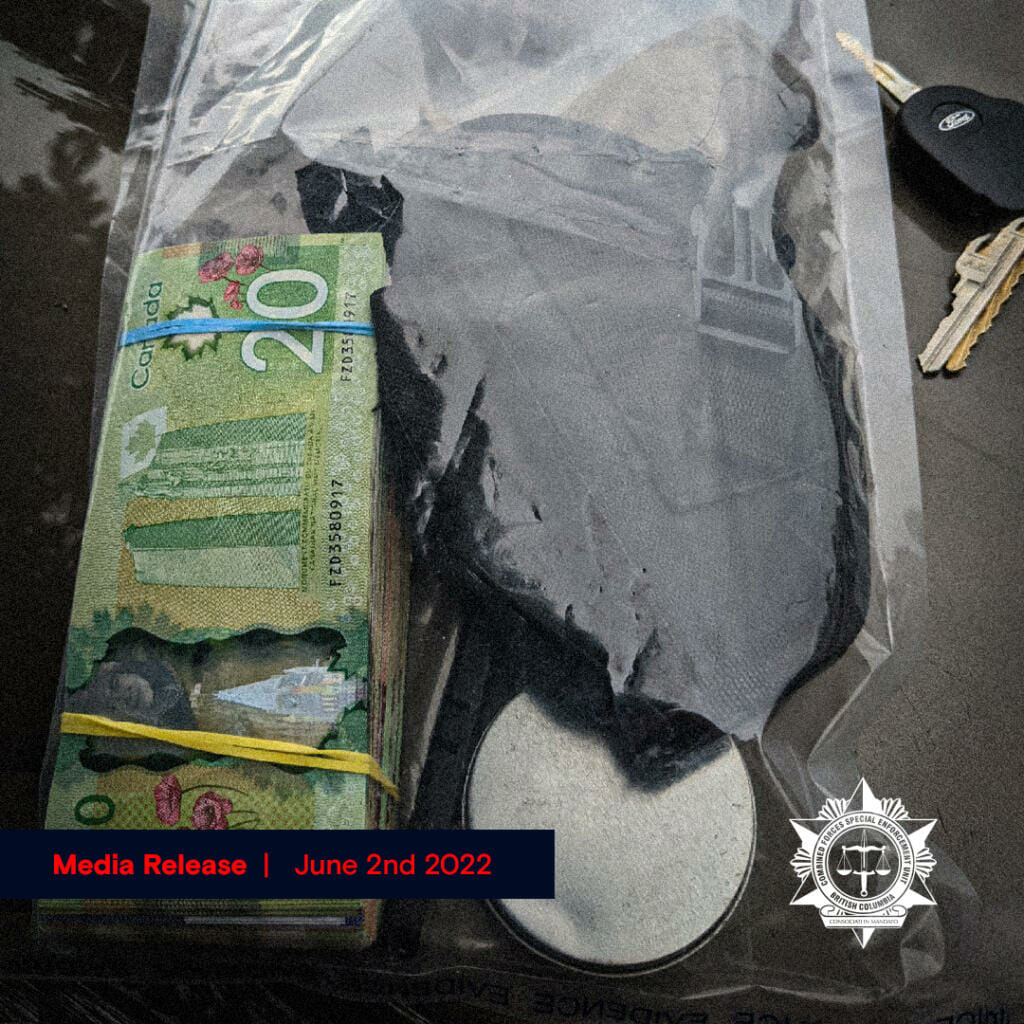 “The deployment of our overt UGET officers to communities throughout the province is one of the core activities that allows CFSEU-BC to contribute to the overall success of reducing gang-related violence,” says Superintendent Alison Laurin, Deputy Operations Support Officer for the CFSEU-BC. “Collaboratively working with the many policing agencies in our province contributes to the overall success of CFSEU-BC to fulfill our mandate in reducing the incidents of gang-related criminal activity and associated violence that threatens the safety of our communities in British Columbia.”

“The enforcement presence of CFSEU-BC’s UGET teams in Kelowna is appreciated by the Kelowna detachment, says Inspector Beth McAndie, Officer in charge of Investigational Services, Kelowna RCMP. “With the support of CFSEU-BC’s UGET who focused on proactive and high visibility policing to disrupt the local street level drug trade Kelowna’s General Duty members could focus on priority issues in our city during this time.”