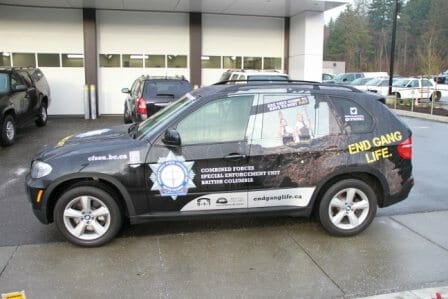 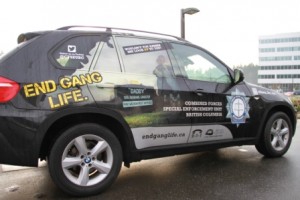 Beginning today, CFSEU-BC will be using a specially wrapped BMW X5 at community events, school talks, and public engagement initiatives across the province to generate conversations about gangs, and gang prevention, as well as to educate people about gang violence in British Columbia. The vehicle will be an integral part of CFSEU-BC’s community outreach initiatives, some of which include the recently released End Gang Life gang prevention and education public service announcement campaign, school talks and presentations, and CFSEU-BC’s annual Community Report. 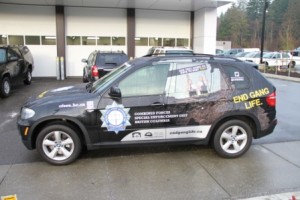 The vehicle will be officially on display for the first time this afternoon starting at 4 p.m. on the plaza of Rogers Arena (the corner of Abbott Street and Expo Boulevard) in advance of the Vancouver Canucks game, where CFSEU-BC will have a display in the “Community Corner” in Section 111 before and during the game.

Sergeant Lindsey Houghton will be on hand between 4 p.m. and 5 p.m. if anyone would like photos, to get b-roll of the vehicle, or for any interviews. 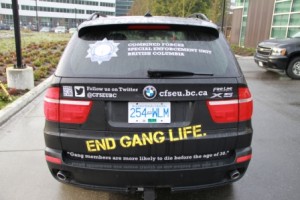 For copies of the End Gang Life material, please email Sergeant Lindsey Houghton at lindsey.houghton@cfseu.bc.ca or Geeta Reddy at geeta.reddy@cfseu.bc.ca.