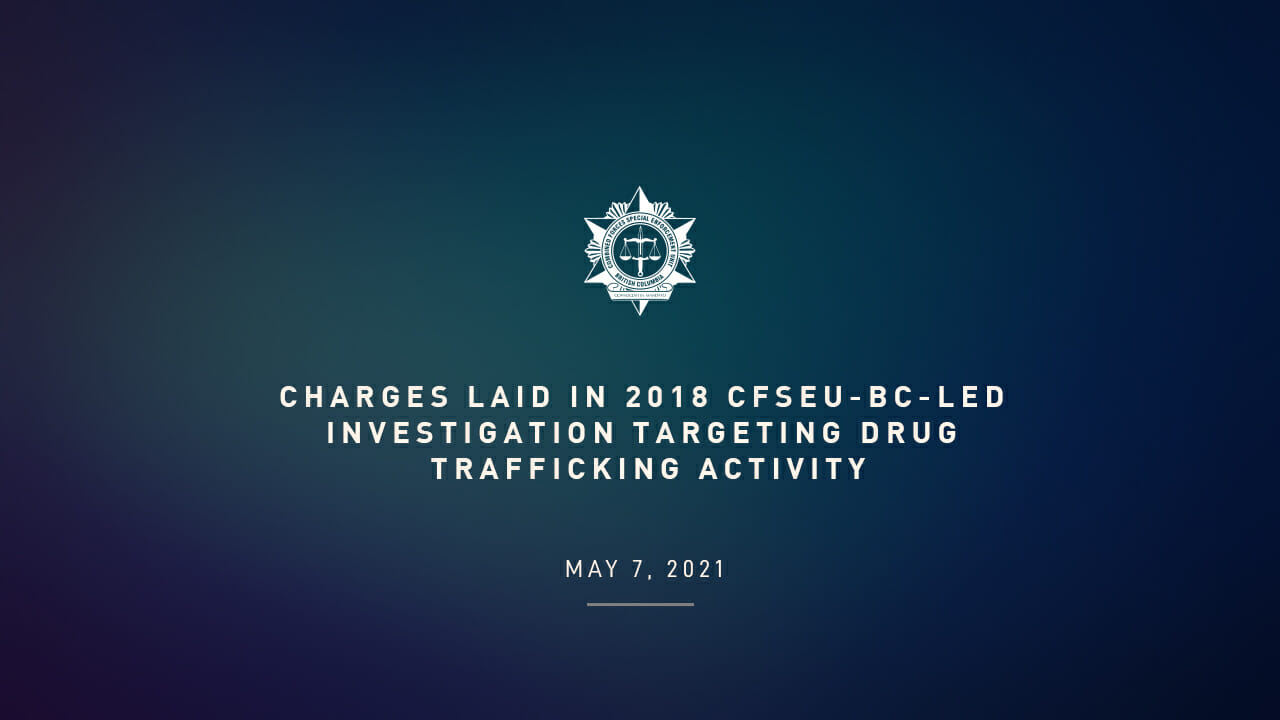 In late 2018, CFSEU-BC worked with the Mission RCMP Drug Section and the Abbotsford Police Department in response to intelligence on an alleged drug line connected to the Brothers Keepers gang that was expanding in the Mission and Abbotsford areas. The conflict to control the drug line territory had become violent and a priority for law enforcement.

Over the course of several months of coordinated inter-agency work, investigators were able to gather evidence on the drug line and those associated with it. This resulted in numerous drug seizures and a search warrant on a residence located in the 6400 block of Riverside Street in Abbotsford where additional evidence, including fentanyl, cocaine, methamphetamine, packaging and cutting agents, cash, and other items were discovered and seized. In addition to the fentanyl seized, the even more potent and potentially deadly carfentanyl was discovered and seized.

Through the course of the investigation, the following was seized:

A total of 38 charges have now been laid in connection to the investigation against seven people.

Gurjap Bhullar was arrested on May 5th by Mission RCMP on outstanding warrants related to the investigation. None of the other accused are in custody and all are wanted on warrants for their arrests. There are no photos available at this time for any of the accused currently wanted.

“The interdiction and prosecution of these individuals would not be possible without the leadership and expertise provided by CFSEU-BC. The Mission RCMP greatly appreciates CFSEU- BC’s ongoing efforts in assisting us to make Mission a safer community,” says Inspector Stephen Corp, Office in Charge of Mission RCMP.

“Policing partnerships are essential to address the gang crime that our communities are facing. The violence and drug activity that fuels gangs does not stop at municipal boundaries,” says Abbotsford Police Department Deputy Chief Constable Brett Crosby-Jones. “This partnership between CFSEU-BC, Mission RCMP and the Abbotsford Police Department represents our combined efforts to keep our communities safe, disrupt gang activity and remove dangerous drugs from our streets.”

“CFSEU-BC and our policing partners in the province have, and will continue to, aggressively target groups like the Brothers Keepers and those who associate with them in order to secure the evidence needed to bring them before the Courts. The disregard for public safety demonstrated by organized criminal groups trafficking potentially deadly opioids and using violence to intimidate rivals and the public will continue to be the focus for CFSEU-BC and our partners,” says Superintendent Duncan Pound, CFSEU-BC Operations Officer. “The Brothers Keepers violent drug activity in 2018 and 2019 made them a top priority and, in addition to charges already announced, more successes are expected to be shared in the months to come.”

6 days ago by CFSEU-BC Communications Strategist 176