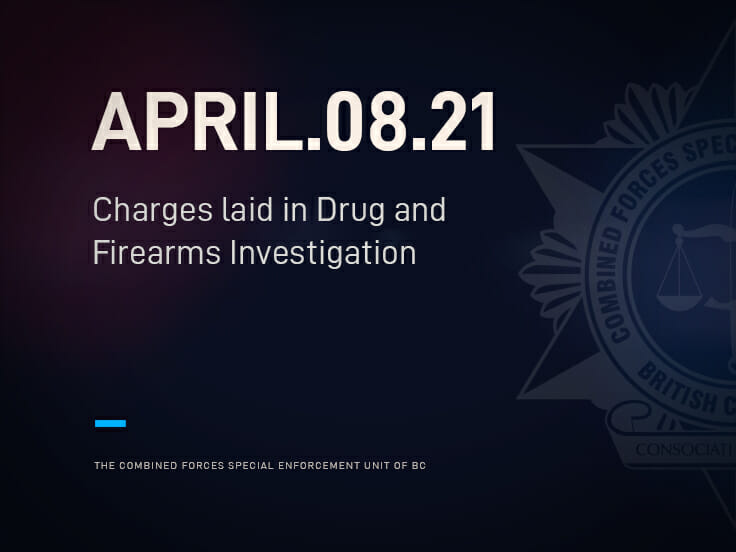 A two-year investigation into an organized crime, drug trafficking organization has led to criminal charges against two men.

In April 2019, the Combined Forces Special Enforcement of BC (CFSEU-BC) commenced an investigation into the operation of an organized crime group led by a male known for his criminal activity and associations to gangs. The investigation led to the arrest of two males and charges laid in relation to drugs and firearms offences.

On March 22nd, 2021, the Provincial Prosecution Service of Canada (PPSC) approved charges against the two men:

Mathew Borden, a 32-year-old male from Burnaby is charged with;

John Canning, a 59-year-old male from Surrey is charged with;

The cash, jewelry, vehicles and a residence located in the 5300 block of Victory St, Burnaby have all been referred to the British Columbia Civil forfeiture Office.

On March 29th, 2021, Mathew Borden was arrested on a warrant of arrest for the criminal charges against him and released on conditions. John Canning was served with a summons. Both men are not in custody while they await the judicial process.

“The removal of potentially deadly drugs and weapons from the hands of individuals who make our communities unsafe is important to CFSEU-BC and motivates our investigative teams every day,” says Sergeant Brenda Winpenny, CFSEU-BC Media Relations Officer. “The CFSEU-BC is dedicated to doing whatever we can to make our streets safer and holding those people accountable who put the public at the greatest risk of harm.”