Convictions and Sentences For Accused in Murder of Jonathan Bacon 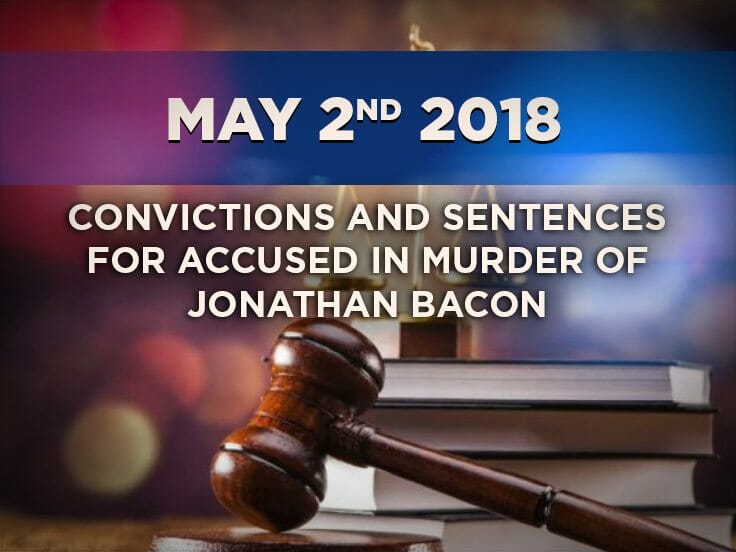 Convictions and Sentences For Accused in Murder of Jonathan Bacon

The three accused in the murder of Jonathan Bacon and attempted murder of four others were convicted and sentenced in Kelowna Supreme Court today.

On the afternoon of August 14, 2011, Jonathan Bacon along with four associates, Larry Amero, James Riach, Lyndsay Black, and Leah Hadden-Watts were the subjects of a targeted gang-related shooting in downtown Kelowna.

The investigation, which was led by the Combined Forces Special Enforcement Unit of British Columbia (CFSEU-BC) and in partnership and supported by numerous other police agencies, came to a conclusion with the arrests of the three accused on Friday, February 22nd, 2013 when multiple warrants were executed in jurisdictions across British Columbia and Ontario. The original media release regarding arrests and charges can be found here.

Originally charged with First Degree murder and Attempted Murder were, Jason Thomas McBride, , Michael Kerry Hunter Jones and Jujhar Khun-Khun. On April 19th, 2018 all three had their charges amended by BC Prosecution Services. The new indictment was before the BC Supreme Court in Kelowna on April 20, 2018 for a first appearance and was adjourned to May 1, 2018.

All three accused entered guilty pleas yesterday May 1st, and today, May 2nd, the accused were sentenced based on a joint submission of statement of facts by BC Prosecution Services and Defence Counsel, resulting in the following;

Jason Thomas McBride plead guilty to Second degree Murder and Attempt to Commit Murder of four individuals. He was sentenced to life in prison with no parole eligibility for 18 years. He will also serve a concurrent 15 year sentence for the Attempt Murders. He will receive credit for time served in pre- trial custody.

Kerry Hunter Jones plead guilty to Conspiracy to Commit Murder and sentenced to 18 years, with credit for time served he will serve a sentence of 10 years.

Jujhar Khun-Khun plead guilty to Conspiracy to Commit Murder and sentenced to 18 years, with credit for time served he will serve a sentence of 10 years.

“The investigation into the murder of Jonathan Bacon and the attempted murders of Larry Amero, James Riach, Lyndsay Black, and Leah Hadden-Watts was extremely large and complex. Over the past six and a half years, hundreds of dedicated and committed officers and support staff from numerous agencies have been involved,” says Assistant Commissioner Kevin Hackett, the Chief Officer of the CFSEU-BC. “Today will hopefully bring some comfort to the community and all of those adversely impacted by the violence that took place on that summer day in 2011. It should also serve as a reminder to those involved in perpetrating gang violence that we will be relentless and resolute as we help bring those individuals who threaten our communities with gun violence to account.”

“When these types of violent crimes occur in our towns and cities it can have a dramatic impact on the people who live, work and visit them,” says Supt. Brent Mundle, Officer in Charge of the Kelowna RCMP. “Today’s convictions and sentencing is a testament to the hard work of investigators from multiple police agencies to hold those responsible accountable, and to protect the communities we serve.”

The CFSEU-BC would like to acknowledge and thank all of the agencies and individuals who assisted during the course of this investigation. They include, but aren’t limited to, the Kelowna RCMP, numerous BC RCMP Divisional resources, the Surrey RCMP, Sunshine Coast RCMP and Ontario RCMP, the Provincial Intelligence Centre (PIC), Toronto Customs and Excise, Public Prosecution Service Canada, BC Prosecution Service – Crown Counsel, CFSEU’s in Toronto, Golden Horseshoe and Edmonton, Vancouver Police Department, Abbotsford Police Department, Victoria Police Department, Integrated Homicide Investigation Team and the Canada Border Services Agency.

7 hours ago by CFSEU-BC Communications Strategist 35