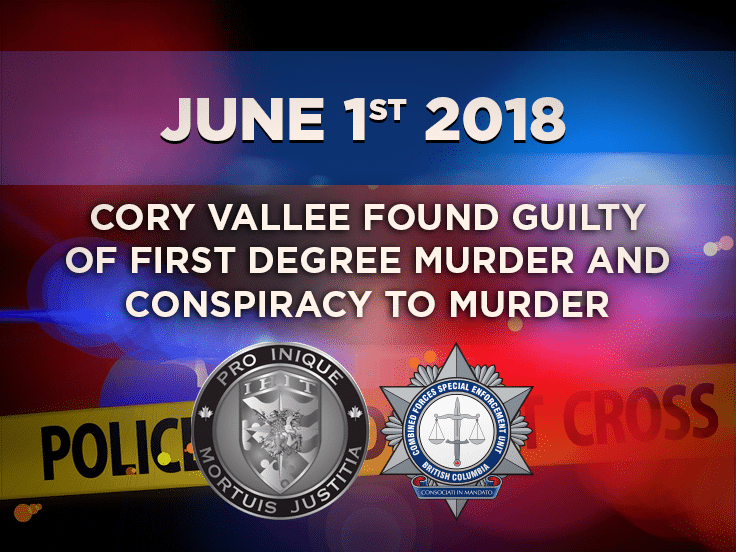 “This was a long, complex and resource intensive investigation,” says Superintendent Donna Richardson, Officer-in-Charge of the Integrated Homicide Investigation Team. “I would like to acknowledge the dedication and tireless efforts of investigators from IHIT and CFSEU-BC as well as our numerous domestic and foreign partner agencies that contributed to this investigation.”

“The sustained cooperation, hard work and persistence of IHIT and CFSEU-BC members has contributed to this result today. Officers and support staff from numerous agencies have also assisted over these past seven years,” says Assistant Commissioner Kevin Hackett, the Chief Officer of the CFSEU-BC. “The result should also serve as a reminder to those who threaten our communities with gang and gun violence, we will not rest until they are held to account.”

Sentencing will be scheduled for a later date.

The Combined Forces Special Enforcement Unit of BC

Weapons and a small amount of illegal drugs were seized after officers from the Combined Forces Special Enforcement Unit – British Columbia (CFSEU-BC) stopped three men on bicycles on the evening of April 9th, 2020 after observing a number of...

Two men have been arrested on outstanding warrants and several potential new charges after officers from the Combined Forces Special Enforcement Unit – British Columbia (CFSEU-BC) spotted a stolen vehicle on April 14, 2020. On the evening of...

One man has been arrested and charged with multiple offences after an Abbotsford Police officer seconded to the Combined Forces Special Enforcement Unit – British Columbia’s (CFSEU- BC) Uniform Gang Enforcement Team (UGET) conducted a vehicle...