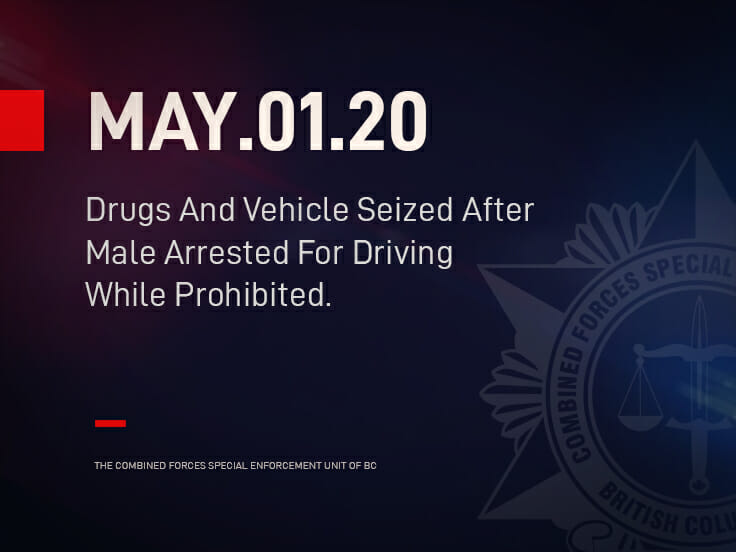 Illegal drugs, cash and a vehicle have been seized after officers from the Combined Forces Special Enforcement Unit – British Columbia (CFSEU-BC) conducted a vehicle stop on the afternoon of April 27th, 2020.

On the afternoon of April 27th, CFSEU-BC Uniform Gang Enforcement Team (UGET) members were conducting regular proactive enforcement patrols in Burnaby when their attention was drawn to a black Porsche Cayenne. UGET members conducted a vehicle stop as this vehicle pulled into a parking spot in the area of Grandview Highway and Boundary Road. UGET discovered the male driver was prohibited from driving and placed him under arrest.
A search of the male and vehicle subsequent to the arrest located a number of items including; an amount of suspected illegal drugs, believed to be methamphetamine and fentanyl, bundles of cash and a can of bear spray.

The Porsche Cayenne was seized as offence-related property and the investigation continues into a number of drug and Criminal Code-related offences.

“This is yet another example of our UGET officers locating potentially deadly drugs within our community and disrupting criminal activity which poses a high risk to public safety,” says Sergeant Brenda Winpenny, Media Relations Officer for CFSEU- BC. “Seizing money found with drugs and the vehicles used to transport those drugs is a primary tool to hamper criminal groups seeking to profit from preying upon vulnerable members of our communities.