An arrest has been made and charges laid in a cross-border gun smuggling and trafficking investigation by the Combined Forces Special Enforcement Unit of British Columbia (CFSEU-BC). 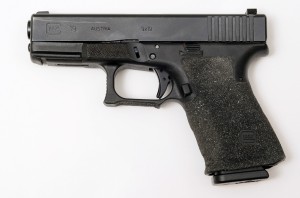 The arrest is the result of an investigation that began with a tip in May that a 30-year-old man, who happened to be a dual Canadian/U.S. citizen, was possibly smuggling firearms from Washington State into British Columbia. CFSEU-BC began an undercover investigation, dubbed Project E-Passkey, after it was learned that the man was living in Osoyoos.

CFSEU-BC investigators determined that the man was allegedly using his dual citizen status to legally purchase firearms at various Washington State gun shows. It is believed that the man used a truck and a car to smuggle the guns through the Oroville, Washington/Osoyoos, British Columbia border crossing.

Through the course of the investigation, evidence was gathered regarding the alleged gun smuggling and it was further uncovered that possibly dozens of guns, believed to be mostly Glock handguns, were being sold to various gang-related groups both in the Okanagan and Lower Mainland.

The man, who has no criminal record and was not previously known to police, was arrested on August 29th without incident in Langley near the intersection of 200th Street and 88th Avenue after allegedly selling an undercover police officer a semi-automatic assault-style Norinco MAK-90 rifle and several steroid kits.

Tyler Ryan Cuff, 30-years-old, of Osoyoos, British Columbia, has been charged with two counts of unauthorized possession of a prohibited or restricted firearm and one count each of careless use of a firearm contravening storage regulations and firearms trafficking. He has been released from custody and his next court appearance is at 9:30 a.m. on September 13th, 2013 in Surrey Provincial Court.

“We all know that guns in the hands of gangsters put everyone at risk,” says CFSEU-BC spokesperson Sergeant Lindsey Houghton. “We are continuing to work with law enforcement partners across North America to stop gun violence in our neighbourhoods and by stopping the flow of guns going to gangsters we are making communities around British Columbia safer.”

“The Canada Border Services Agency is proud to be working closely with other law enforcement agencies as part of CFSEU-BC. These partnerships are invaluable and are proving to be essential in the detection, interception, and prosecution of those involved in the conduct of illegal activity,” said Canada Border Services Agency Executive Director, Pacific Region, Kim Scoville. “Today’s announcement is another example of the success of these initiatives.”

CFSEU-BC would like to recognize the assistance of law enforcement agencies throughout the investigation including the RCMP’s the Integrated Border Integrity Team, Canada Border Services Agency, the National Weapons Enforcement Support Team, the United States Bureau of Alcohol, Tobacco, Firearms and Explosives, and the United States Department of Homeland Security.