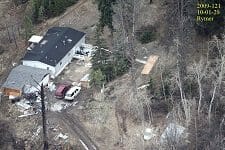 Combined Forces Special Enforcement Unit – BC has dismantled a major drug operation with ties to a number of criminal groups, including Eastern European Organized crime.

This group was responsible for the production of methamphetamine and ecstasy at multiple clandestine labs throughout British Columbia. The large quantity of precursor chemicals and equipment found at these locations indicate that this group was in the business of operating super labs. One of the labs was to be housed inside an underground bunker on a rural property about 40 km north of Kamloops.

In addition to methamphetamine production, 32 firearms including an M-16 rifle, handguns, silencers, a grenade and ammunition was seized. Investigators also recovered $1 million worth of stolen property, and have arrested and charged two individuals. 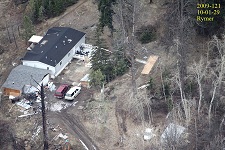 While CFSEU began its investigation in 2009, it originated from a missing person file in Vancouver. Ronald William Carlow, who was 38 at the time, was reported missing by his girlfriend in June 2007. During the course of the Vancouver Police Department’s investigation, officers learned of possible ties to an organized crime group. The VPD turned that information over to CFSEU and in June of 2009, we began our investigation.

In June 2010, CFSEU executed warrants on three properties in Surrey and one 80-acre property in the 1900-block of Warren Rd., in Pritchard, B.C.

The chemicals and by-products used to produce Ephedrine and methamphetamine found at all of the properties, were classified as hazardous waste. The products were also extremely flammable. “This was a sophisticated, well-organized drug operation that encompassed many aspects of organized crime including the manufacturing of drugs and guns,” said Supt. Pat Fogarty, the officer who heads CFSEU’s organized crime division. “There were also many unique aspects to this investigation including the fact that they were producing their own Ephedrine. This is not commonly found in British Columbia,” added Supt. Fogarty.

Two individuals are facing a number of firearms and drug-related charges.

Ante DRAGUSICA, 34, of Surrey B.C.
Ivan GEORGIEV, 39 of Langley
At the time of Georgiev’s arrest last June in Kamloops, a two-year-old child was turned over to the Ministry of Social Services due to the serious safety issues at the Pritchard property where the child was living with her parents. Tereza KIRIAKOVA, 27, also faces a 10-year firearms ban.