Susan (not her real name) remembers the cramped, smelly bus ride from Vancouver to Calgary.
She is carrying a bag of cash, intended to buy drugs from gang members in Calgary.

When she gets there, she meets two men in a parking lot. The exchange goes wrong. One of the men hits her. She falls to the ground. And then they start kicking her.

When they stop, the money is gone. The drugs are gone. Susan is lying bloodied on the pavement. But she is worried – in fact, frightened to death – about one thing above all: how she is going to explain what happened to her gang bosses back home.

Raw, gritty and told by Susan herself, her story is the cen 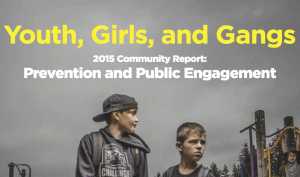 Formed in 2009, CFSEU-BC is tasked with combating gang activity throughout the province, and since 2013 it has published annual community reports as part of its public education and advocacy efforts.

The theme of the 2015 report is “Youth, Girls and, Gangs,” with stories and commentary that focus on the increasing involvement of younger people and women in gangs.

“The gang landscape in BC is continually changing,” says Con- stable Jordan McLellan, community engagement of cer for CFSEU-BC. “The typical gangster used to be a male in his late 20s, but now very young men and women are getting involved in the gang lifestyle. Some are as young as 15 – children who can’t really appreciate the consequences of their actions.”

According to the CFSEU-BC report, the average age of a victim of gang violence 10 years ago was 30. Today, the average is 25, and the youngest victim this year was only 15 years old.

Why the increase? Recruiters for gangs actively prey on youth’s naïveté. Culture plays a part, too, with easy access by ever-younger kids to glamorized gang images in TV shows, music and movies.

For too many, it works.

“There’s an allure to the gang lifestyle – an easy life, lots of money, girls will like you, people will respect you,” says McLellan. “The reality is that the life is not easy, the money goes just as fast as it comes, and you end up destroying your relationships with friends and family.”

Sadly, it’s a similar pattern for the increasing number of girls recruited into BC gangs.

Typically, young women get in- volved because they are seduced by the seemingly lavish lifestyle gangsters enjoy. Many begin the journey as girlfriends, but after a time they take on more active roles, like holding drugs or hiding weapons. Some, like Susan, get more deeply involved.

One of the reasons for that trend is CFSEU-BC’s enforcement and investigative activities, resulting in several arrests of high-level gang criminals this year.

As well, the unit has launched a high-prole “prevention through education” program called End Gang Life (endgan- glife.ca), whose goal is to keep people out of gangs by telling the other side of the story.

A multi-media campaign that features a website, posters, radio ads, and thought-provoking videos, End Gang Life reveals the hard realities of gang activity, and the damage it does to individuals, families and communities.

The program also provides parent resources in eight different languages, to help adults have frank and effective con- versations with their kids about gangs.

“These resources are a good start to having a discussion,” says McLellan. “Parents need to understand that it may be a hard talk to have with your kids, but it will be easier than talking about their funeral.”

For Susan – who is, at last, out of gangs – the impact of the End

Gang Life campaign is very real. Earlier this year, after she saw the posters and visited the web- site, she approached CFSEU-BC with an offer to tell her story and help educate other young wom- en on the realities of life as a gang member.

“I was young, I was stupid, and I would caution any kid against this,” she writes in the report. “What I lived through, I didn’t come out unscathed. I came out damaged, with wounds that’ll never heal and emotional scars that will linger forever.”

Outlaw motorcycle gangs exist in every province of Canada. They interconnect across provincial/municipal jurisdictions and have national/international connections and associations.Combatting Outlaw Motorcycle Gangs & Organized Crime Outlaw...

Outlaw Motorcycle Gangs in BC

The Strategic Research Office (SRO) shoulders the responsibility of studying and developing strategies that are being employed are evidence-based, pragmatic, and have been proven to work in other parts of the country and the world.Studying Past...