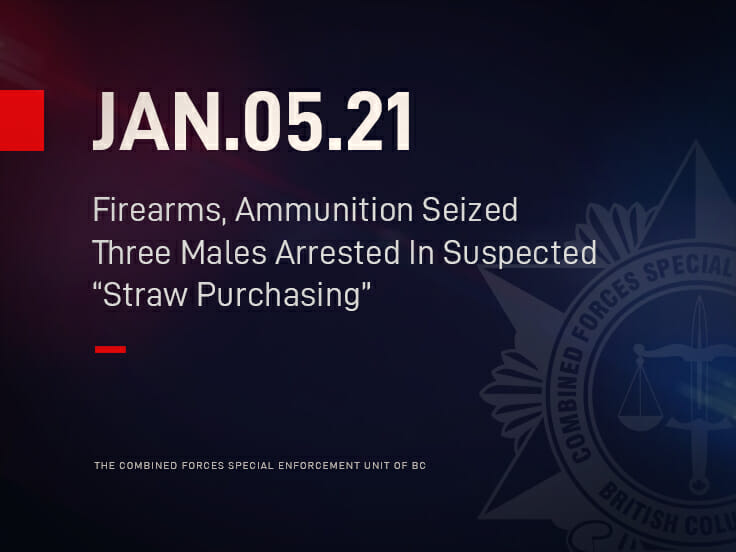 Several firearms have been seized and three men arrested after officers from the Combined Forces Special Enforcement Unit – British Columbia (CFSEU-BC) conducted a search warrant of a residence in relation to a firearm trafficking investigation on January 2, 2021.

In late December 2020, information was received that led the CFSEU-BC Illegal Firearms Enforcement Team (IFET) to begin a firearm trafficking investigation into a suspected “straw purchaser”. A Straw Purchaser is someone with a valid Possession and Acquisition License (PAL), who obtains firearms for someone who otherwise could not, or who does not want their name associated with the transaction. These firearms are often purchased for those within the criminal element.

On January 1st, CFSEU-BC IFET observed a male acquire, and then transport, a number of restricted firearms, as well as a large amount of ammunition, to a residence in the 21800 block of 56 Ave, Langley, contrary to authorization from the British Columbia Chief Firearms Officer (CFO) which required the male to transport the firearms to, and store them at, a residence in Sooke. With the assistance of the Lower Mainland District Emergency Response Team (LMD ERT), three men were arrested.

On January 2nd, CFSEU-BC IFET members along with UGET executed a search warrant of the 56th Ave property, seizing the previously purchased firearms and ammunition, as well as other firearms and paraphernalia associated to organized crime.
The investigation into the alleged “straw purchaser” and several firearms-related Criminal Code offences continues.

“Straw Purchasing and illegal trafficking of firearms puts firearms in the hands of individuals who use them for a criminal purpose,” says Sergeant Brenda Winpenny, Media Relations Officer for CFSEU-BC. “Straw Purchasers put our communities at risk and CFSEU-BC IFET remains vigilant in their pursuit to identify, investigate and arrest these individuals who threaten the safety of our public.”

7 hours ago by CFSEU-BC Communications Strategist 33

8 days ago by CFSEU-BC Communications Strategist 127