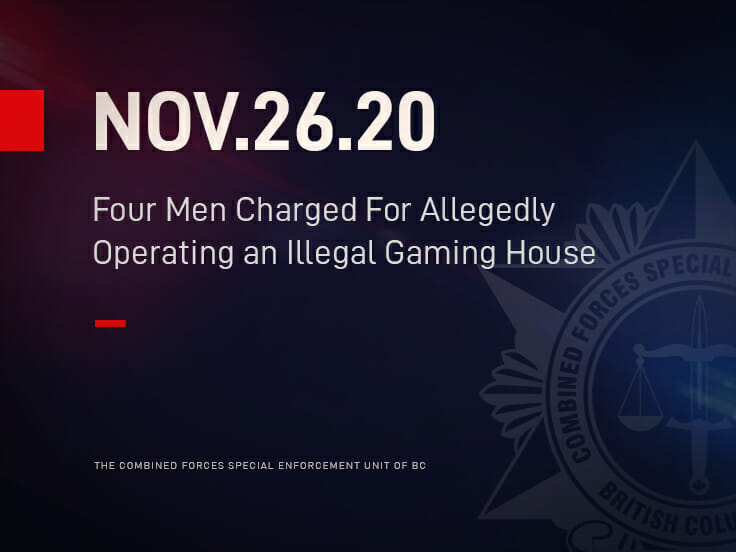 On the evening of July 4th, 2020 CFSEU-BC JIGIT, with the assistance of the CFSEU-BC’s Uniform Gang Enforcement Team (UGET) and the Lower Mainland District Emergency Response Team (LMDERT), executed a search warrant at the business and located several individuals participating in activity that appeared to be that of an illegal gaming house.

Seized from the business were items such as; poker tables, slot machines, cash, poker chips and playing cards.

A charge of keep a common gaming house or common betting house contrary to the Criminal Code of Canada has now been laid against four males;

“Illegal gaming, and the locations that allow them, have been the root of other criminal offences that impact the safety of the public. It is a criminal offence to be involved in the active participation of illegal gaming and in British Columbia, all gaming activity that may result in a form of financial gain to those involved in its operation, must be sanctioned by the Province of British Columbia’s Gaming Policy and Enforcement Branch (GPEB),” says CFSEU-BC Media Relations Officer Sergeant Brenda Winpenny.

As this investigation is now before the courts, no further information will be released.

The CFSEU-BC would like to thank the Burnaby RCMP and Lower Mainland District Emergency Response Team for assisting with this investigation.