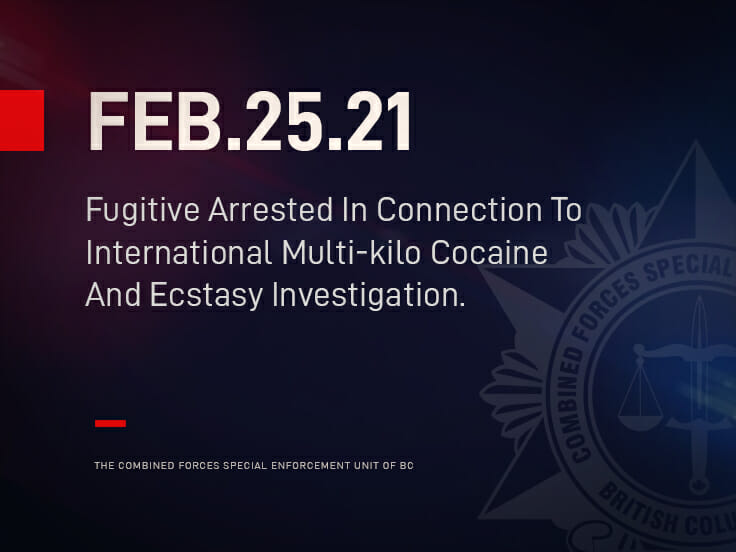 Years on the run from the Combined Forces Special Enforcement Unit of British Columbia (CFSEU-BC) has ended for Khamla Wong after he was arrested on February 24th by CFSEU-BC investigators, with the support of CFSEU-BC’s Uniform Gang Enforcement Unit (UGET) and Richmond RCMP members at Vancouver International Airport. Wong will now face justice after being charged in connection to a 2008 CFSEU-BC investigation into the importation of multi-kilo shipments of cocaine into Canada and exportation of ecstasy into the United States. The investigation resulted in the seizure of tens of millions of dollars worth of illegal and potentially deadly drugs, along with the arrests and subsequent convictions of several people.
On February 24th, 2021, Khamla Wong, who was wanted on an Interpol “red notice” (an international warrant), was arrested by CFSEU-BC investigators at Vancouver International Airport in related to the 2008 CFSEU-BC international drug investigation. Wong was charged in July 2012 after the Public Prosecution Service of Canada (PPSC) approved charges for conspiracy to traffic cocaine, conspiracy to import cocaine and possession of a loaded prohibited firearm. Wong returned to Canada and is currently being held in custody pending the judicial process.

In August 2012, charges were laid against six men, including Khamla Wong, in relation to a CFSEU-BC drug investigation that spanned British Columbia, California, Mexico and Peru. A number of seizures took place over the course of the investigation beginning on August 21st, 2008 when 23 kilograms (117,000 pills) of ecstasy pills were seized in Princeton, British Columbia. On December 20th, 2008, another 121 kilograms of cocaine were seized at the Pacific Border Crossing. A few days later, on December 24th, 2008, a further 97 kilograms of cocaine hidden inside a commercial transport truck carrying bananas were also seized at the Pacific Border Crossing. In May 2009, another 10 kilograms of cocaine were seized in Burnaby.

The investigation progressed for six more months and concluded with seven warrants executed in June 2009 at residences in Chilliwack, Burnaby, Surrey, Langley, Abbotsford, and the Lake Country in the Okanagan. Those searches resulted in the seizure of four firearms including a restricted .44 Magnum pistol and a number of prohibited firearms including a 357 Magnum revolver, a 38 calibre semi- automatic pistol and a 40 calibre semi-automatic pistol. Several individuals were arrested and charged. See original release.

There were several convictions and significant sentences in relation to this investigation. See original release.
“We will not stop our relentless pursuit of those individuals who cause significant harm and pose the greatest risks to our safety due to their involvement in gang and organized crime activity, even a decade or more ago,” says Superintendent Duncan Pound, Acting Chief Officer, CFSEU-BC. “Time and time again we have sought out individuals living abroad to hold them accountable and face justice in Canada. Those who remain on the run from CFSEU-BC should know that we will not stop until we find you.”

CFSEU-BC would like to thank the Canada Border Services Agency, the Integrated Homicide Investigation Team, and the many other agencies who have assisted on this complex investigation over the years.