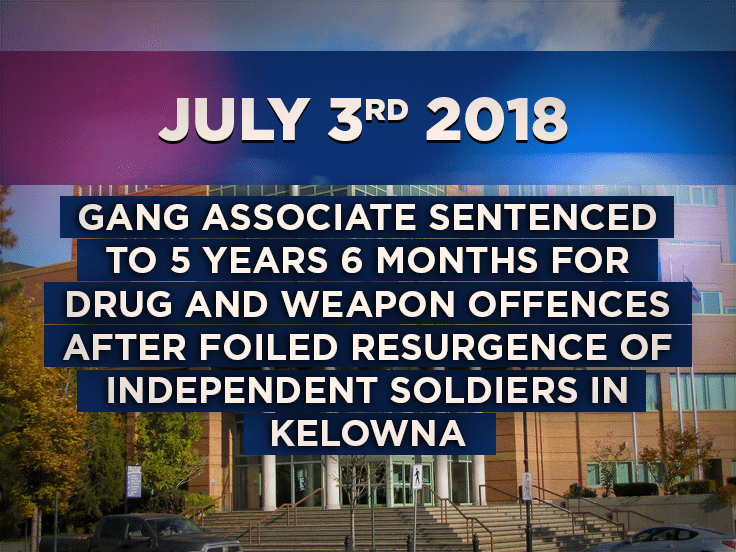 In early 2014 the CFSEU -BC led an investigation into a long-time Independent Soldiers gang member and his girlfriend after receiving information that a Kelowna-based Independent Soldiers (IS) member was allegedly actively recruiting new members for the IS for a planned resurgence of the notorious gang.

The investigative efforts came to a conclusion On January 30, 2015 after Donahugh Frederick McWhirter and his girlfriend Brittany Stinn were arrested followed by the execution of a Search Warrant at a residence in the Lake Country area. Throughout this investigation several drug seizures were made as well as firearms. See original release here.

Possession of Firearms while Prohibited

Count 6 – s. 117.01(1) CC – unlawful possession of Mossberg 20 gauge shotgun while being under a court order prohibiting possession of firearms

Count 7 – s. 117.01(1) CC – unlawful possession of Squires and Bingham .22 calibre rifle while being under a court order prohibiting possession of firearms

On June 29, 2018, Donahugh McWhirter was sentenced, in Kelowna Supreme court, to 5 years and 6 months in prison in his attempt to create a resurgence of the Independent Soldiers. As part of McWhirter’s plea agreement, PPSC has stayed all charges against his girlfriend Brittany STINN.

The CFSEU-BC would like to thank the Vernon RCMP, Lake Country RCMP, Kelowna RCMP, Merritt RCMP, and the Central Interior Traffic Services Unit for their assistance and contributions to this investigation.