Several firearms suppressors and conducted energy weapons (CEW’s) have been seized and one male charged after officers from the Combined Forces Special Enforcement Unit – British Columbia (CFSEU-BC) investigated the alleged importation of prohibited devices and weapons.

Following the arrest, search warrants were executed on a residence in the 900 block of Quadling Avenue and a storage locker resulting in the seizure of items including the following:

On June 8th, 2021 John Summers, a 33-year-old male from Coquitlam was charged with a total of 6 offences including the following; 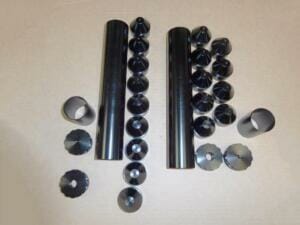 “The Crime Gun Intelligence and Investigations Group of CFSEU-BC continues to work with our partners in public safety to identify individuals and groups engaged in the Trafficking of prohibited weapons and devices such as firearm suppressors,” says Superintendent Duncan Pound, Operations Officer for CFSEU-BC. “These weapons and devices in the wrong hands can pose a significant risk to public safety and be used during the commission of serious crimes. CFSEU-BC will continue to investigate individuals suspected of illegally acquiring these items; if you have information that can assist us, please visit our website for more information.”

This investigation is now before the courts and would not have been successful without the assistance and support of our partners from Canada Border Services Agency, National Weapons Enforcement Support Team, Lower Mainland Emergency Response Team, and Burnaby and Coquitlam RCMP.