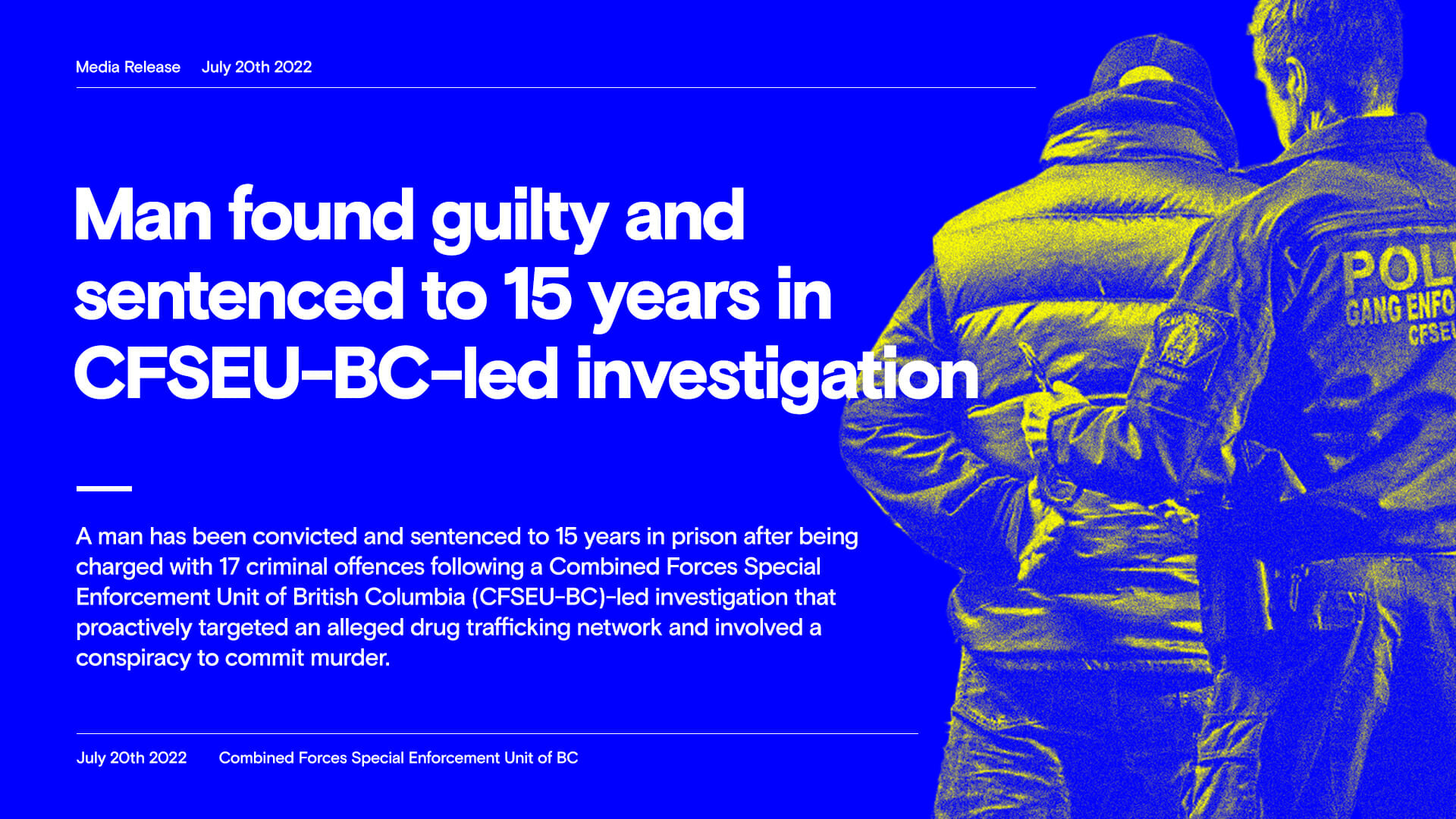 A man has been convicted and sentenced to 15 years in prison after being charged with 17 criminal offences following a Combined Forces Special Enforcement Unit of British Columbia (CFSEU-BC)-led investigation that proactively targeted an alleged drug trafficking network and involved a conspiracy to commit murder.

In late 2020, CFSEU-BC worked with the Surrey and Burnaby RCMP in response to information learned of an alleged conspiracy to commit murder. The investigation identified one suspect who was believed to be plotting to commit the murder.

In December 2020 CFSEU-BC, with assistance from Burnaby RCMP, Surrey RCMP, and Lower Mainland District Integrated Emergency Response Team (LMD IERT), executed search warrants in multiple jurisdictions around the lower mainland. The suspect was found at one of the search locations and was arrested.

The following was seized as a result of the search warrants:

Various prohibited and non-prohibited weapons On March 18th, 2021 Brandon Nandan, a 28-year-old male from Surrey, was charged with the following Criminal Code and Drug Offences:

On May 25th, Nandan was charged with an additional offence:

Brandon Nandan was sentenced to a total of 15 years imprisonment with a mix of consecutive and concurrent sentences for the offences he pleaded guilty to. Considering his time already served of two years and seven days, the total remaining sentence is 12 years and 358 days.

“As the provincial anti-gang agency, CFSEU-BC continues to proactively target individuals linked to violent gang activities and opioid trafficking that too often victimizes the most vulnerable in our communities,” says CFSEU-BC’s Deputy Operations Officer, Superintendent Duncan Pound. “Working with the Surrey RCMP and Burnaby RCMP, CFSEU-BC investigators were able to thwart a murder plot, disrupt other violent acts that would have endangered innocent lives, and prevent additional opioid- related deaths.”

CFSEU-BC would like to acknowledge and thank the Surrey RCMP, Burnaby RCMP, Lower Mainland District Integrated Emergency Response Team (LMD IERT), and all of the other units that supported this investigation.