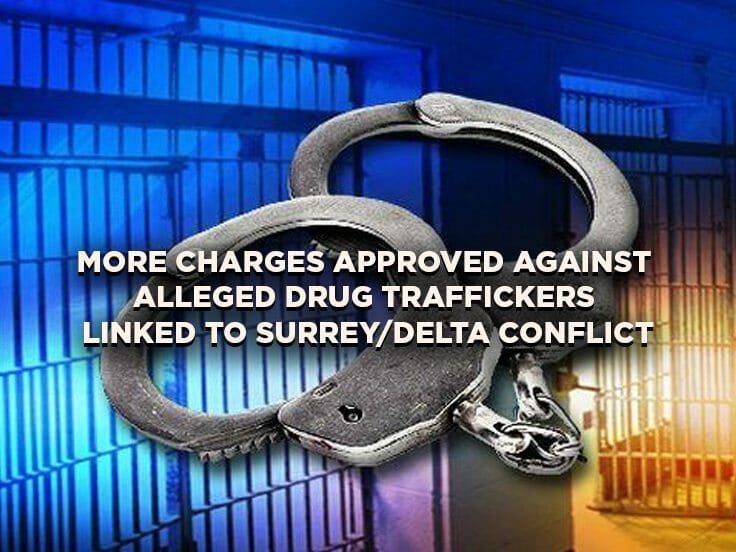 An investigation into the violent drug conflict which took place in Surrey and Delta last summer has led to charges being approved against three Surrey men. The investigation, led by the Combined Forces Special Enforcement Unit of B.C. (CFSEU-BC), working with the Surrey RCMP Drug Section and the Delta Police Department, looked into the alleged criminal activities of a drug trafficking group which had links to the Surrey/Delta conflict.

In April 2015, the CFSEU-BC, the Surrey RCMP Drug Section, and the Delta PD began an investigation into a dial-a-dope drug line associated to individuals involved in the Surrey/Delta drug conflict. As a result of a three month investigation, two search warrants were executed on residences in Surrey. A search of both residences resulted in the seizure of the following items:

Crown Counsel has now approved 18 charges for the three men identified in the investigation.

20-year-old Chaten Singh Dhindsa of Surrey has been charged with 10 counts of trafficking and one count of possession for the purpose of trafficking.

21-year-old Jordan Singh Rana of Surrey has been charged with five counts of trafficking, one count of obstructing a police officer.

32-year-old Davjit Singh Randhawa has been charged with one count of trafficking.

All three men are out of custody and will be summoned to appear in court at a later date. Court imposed conditions on the accused have been put in place to deter further criminal activity.

As a result of the efforts of the CFSEU-BC, the Surrey RCMP, and the Delta Police Department, 28 individuals that were directly related to the conflict have had 194 charges advanced against them comprising of 51 separate offences.

“The CFSEU-BC will continue to target and prosecute those groups or individuals who are involved in criminal activities within BC,” says CFSEU-BC spokesperson Cst. Jordan McLellan. “Having charges approved for these individuals will now hold them accountable for their actions which have negatively impacted the residents of Surrey and Delta.”

“The Surrey RCMP is pleased by the headway that our detachment and policing partners are making against individuals involved in drug trafficking and the other dangerous activities on our streets,” says Surrey RCMP Cpl. Scotty Schumann. “These arrests and investigations remain a top priority for the Surrey RCMP and our partners.”

The CFSEU-BC would like to thank the Surrey RCMP and the Delta Police Department for their assistance in this investigation.