Many of you may recognize him as the Vancouver Police Department’s long-time Media spokesperson. He’s held that post since 2008. CFSEU welcomes his secondment to our 14-member agency, as he brings a wealth of experience to our communication section.

After winning the B.C. Chiefs of Police award for “Top Recruit” in his academy class, he patrolled the south side of the city for the next four years. In addition to regular patrol duties, he trained and mentored new recruits.

In 2002, Sgt. Houghton joined the VPD Crowd Control Unit and worked both as a Constable and as an Acting Sergeant in the unit for six years. 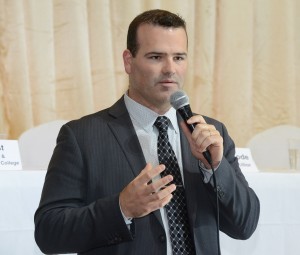 During that period, he also worked in Car 86 (Child Protection Car) and Y20 (the Street Youth Intervention Car). These collaborative Vancouver Police Department / Ministry of Children and Family Development cars advanced his expertise in working with high-risk, street-entrenched youth. He shared that knowledge as a speaker at conferences and symposiums on high-risk / sexually exploited youth and acted as a resource to Department of Justice officials dealing with the Youth Criminal Justice Act.

In his spare time, Sgt. Houghton manages and plays goal on the Vancouver Police “Centurions” Hockey Club, the VPD’s competitive hockey team. He is extremely proud of the charitable work the team does in aid of charities such as the B.C. Children’s Wish Foundation, the H.E.R.O.S. (Hockey Education Reaching Out Society) program, Covenant House – Vancouver, and the Vancouver Police Union Charitable Foundation.