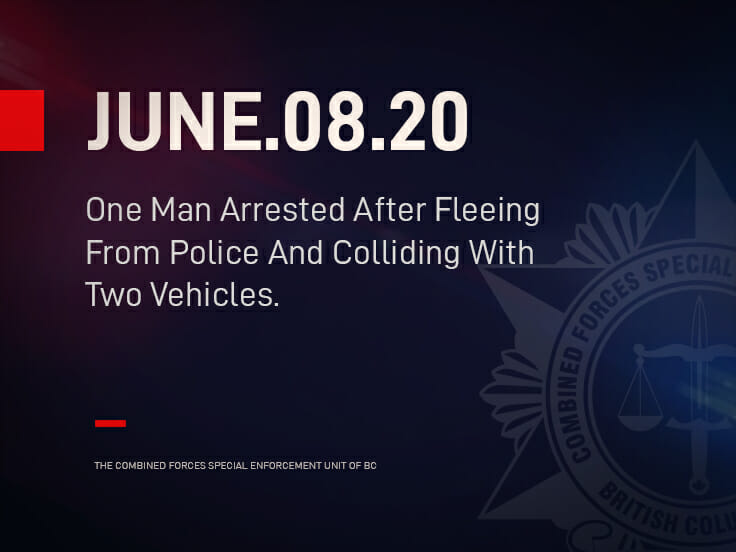 One man has been arrested and charged with multiple offences after officers from the Combined Forces Special Enforcement Unit – British Columbia (CFSEU-BC) Uniform Gang Enforcement Team (UGET) attempted to conduct a vehicle stop and the suspect vehicle fled, colliding with two vehicles.

On the afternoon of June 2nd, CFSEU-BC Uniform Gang Enforcement Team (UGET) members were conducting regular enforcement patrols in Maple Ridge when they came across a vehicle whose registered owner was flagged to be served for offences under the Motor Vehicle Act. UGET members attempted to stop the vehicle in the 12000 block of Plaza Street, but after slowing down as if to pull over and stop, the vehicle accelerated away from the area and collided with a vehicle a short distance away near Plaza Street and Dewdney Trunk Road. UGET members attended to the collision and assisted the occupant of the vehicle while the suspect vehicle continued to drive in an unsafe manner and collide with a second vehicle near Dewdney Trunk Road and 222 Street, a short distance away from the first collision. Fortunately, no one in either vehicle was injured.

The 26-year-old male driver, Richard MARQUEZ DE SADELEER from Chilliwack, has been charged with several offences under the Criminal Code of Canada related to driving a vehicle in an unsafe manner dangerous to the public and obstructing and fleeing from police. The investigation into this incident is ongoing.

“CFSEU-BC Uniform Gang Enforcement Team members provide a pro-active law enforcement presence across the Lower Mainland every day to ensure public safety,” says Sergeant Brenda Winpenny, Media Relations Officer for CFSEU-BC. “Risks, especially during the pandemic, are always present, and require all members to be vigilant. We are relieved that no one was injured in this incident and that the accused will be brought before the Courts to answer for his actions.”

The CFSEU-BC would like to thank the Lower Mainland Integrated Police Dog Services as well as members of the Ridge Meadows RCMP Detachment for their assistance on this investigation.