One Man Arrested and Charged after fleeing in Stolen Vehicle 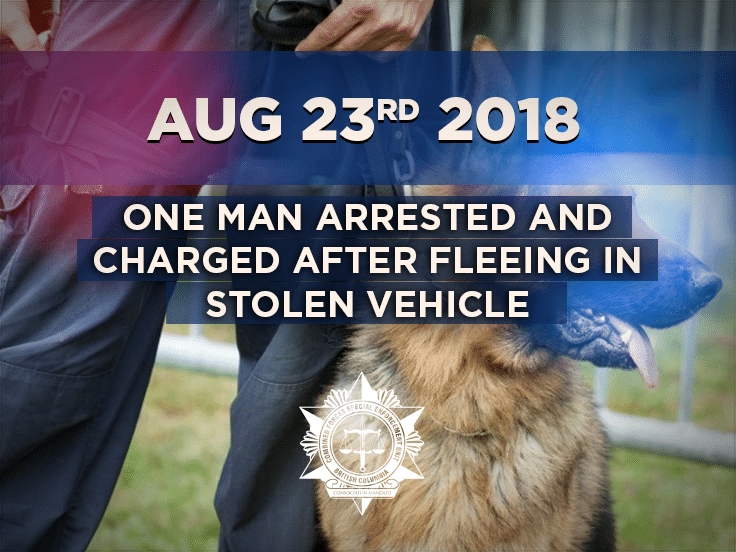 One Man Arrested and Charged after fleeing in Stolen Vehicle

On the evening of August 17, 2018 officers from the CFSEU-BC observed a male in a vehicle that had previously been reported stolen.

CFSEU-BC Uniform Gang Enforcement Team (UGET) members attempted to conduct a traffic stop of the vehicle, as it pulled into a gas station in the Surrey area, but then fled the area. Police did not pursue the vehicle and used the assistance of the RCMP Air 1 helicopter (Air 1) to track its movement while it was being operated in an unsafe manner.

Air 1 was able to safely relay to surrounding police vehicles that the stolen vehicle had stopped in the area of 64th Avenue and 152nd Street in Surrey and the male driver was seen running from the vehicle.

Lower Mainland Integrated Police Dog Services (PDS) attended the area and tracked the male to the 100 block of 62 A Avenue in Surrey, where he was arrested. In an attempt to evade arrest, the male sprayed the police officer and his police dog with bear spray.

Subsequent to the arrest, members seized a quantity of a variety of alleged illegal drugs in the possession of the male.

“This arrest shows the daily commitment to tackle gang violence of the CFSEU-BC, and successfulnessof an integrated approach to working with our police partners,” says Sergeant Brenda Winpenny of the CFSEU-BC. “Without a carefully coordinated plan, we would not be able to disrupt the criminal behavior of individuals who are engaged in acts that pose the highest risk to the public and hold them accountable.”

The CFSEU-BC would like to thank the RCMP for their assistance on this investigation.

1 day ago by CFSEU-BC Communications Strategist 99