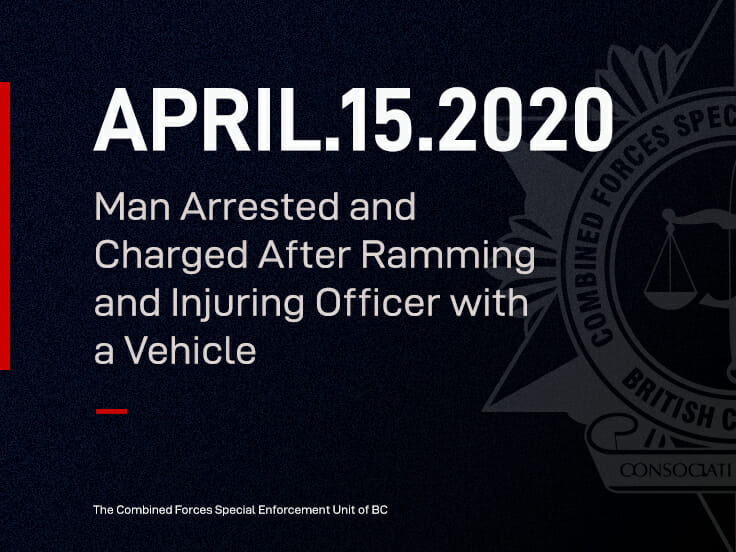 Previous item Two Men Arrested After... Next item One Man Arrested on...

One man has been arrested and charged with multiple offences after an Abbotsford Police officer seconded to the Combined Forces Special Enforcement Unit – British Columbia’s (CFSEU- BC) Uniform Gang Enforcement Team (UGET) conducted a vehicle stop.

On the evening of April 11th, CFSEU-BC Uniform Gang Enforcement Team (UGET) members were conducting enforcement patrols in the Lower Mainland and one team member stopped a suspicious vehicle in the area of 160th St and 104th, Surrey. The vehicle stopped briefly before fleeing the area with both vehicles sustaining damages. It is alleged the driver accelerated towards the police, struck the police vehicle and injured the UGET member in the process. The injured officer was able to call for assistance and was transported to hospital. He was later released with minor injuries and is recovering at home.

An immediate and integrated police response including additional UGET resources and the Surrey RCMP secured the scene and began efforts to locate the vehicle. The suspect and his vehicle were quickly located in the Coquitlam area and, shortly thereafter, the driver
was arrested without incident.

The 51-year-old male driver, James Richardson of Maple Ridge, has now been charged with a number of offences under the Criminal Code of Canada as well as the provincial Motor Vehicle Act in relation to this incident. Those offences include;

“CFSEU-BC Uniform Gang Enforcement Team members provide a pro-active law enforcement presence across the Lower Mainland every day to ensure public safety,” says Sergeant Brenda Winpenny, Media Relations Officer for CFSEU-BC. “Risks, especially during the pandemic, are always present, and require all members to be vigilant. Any individual willing to assault the police poses an even greater risk to the general public; we are relieved the injuries to our teammate were minor, enforcement efforts quickly located the accused and that the accused will be brought before the Courts to answer for his actions.”

The CFSEU-BC would like to thank the Surrey and Coquitlam RCMP Detachments for their assistance on this investigation.