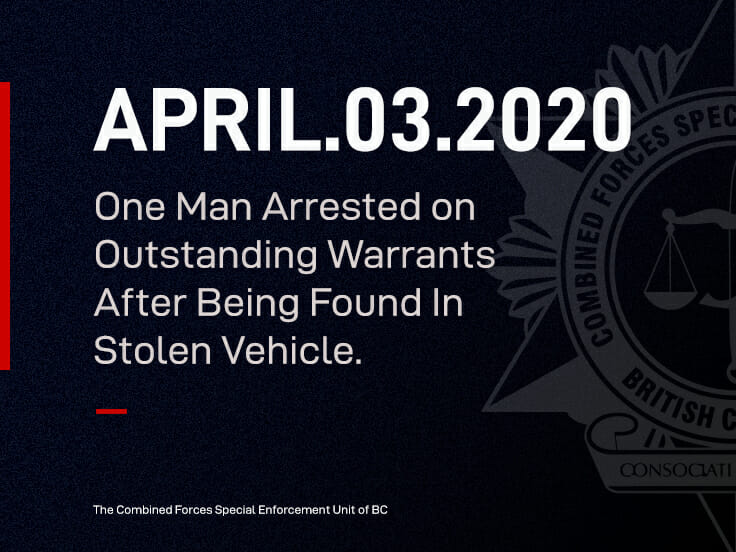 One man with several outstanding warrants has been arrested after officers from the Combined Forces Special Enforcement Unit – British Columbia (CFSEU-BC) spotted him behind the wheel of a stolen vehicle on the evening of April 2nd, 2020.

On the evening of April 2nd, CFSEU-BC Uniform Gang Enforcement Team (UGET) members were conducting regular patrols in the Lower Mainland when they came across a vehicle that was reported as stolen. With the assistance of the RCMP’s Air 1 helicopter (Air 1), the Integrated Police Dog Services, Coquitlam RCMP, Burnaby RCMP, and Vancouver Police Department, officers were able to track the vehicle’s movements throughout several jurisdictions and safely arrest the driver near Brentwood Mall in Burnaby.

The 28-year-old male driver, Tyrell Woods from Surrey, was held in custody for the outstanding arrest warrants.

“The cooperative and integrated response of all units involved was the key to this successful enforcement effort,” says Sergeant Brenda Winpenny, Media Relations Officer for CFSEU-BC. “While our operations have adjusted in response to the pandemic to protect the public and our officers, proactive law enforcement will continue. Criminals continue to be active right now and so will CFSEU-BC.”

The CFSEU-BC would like to thank the integrated teams and the RCMP Detachments for their assistance on this investigation.