Recovery of Stolen Property from within BC Wildfire Evacuation Zone, Results in the Arrest of a Male 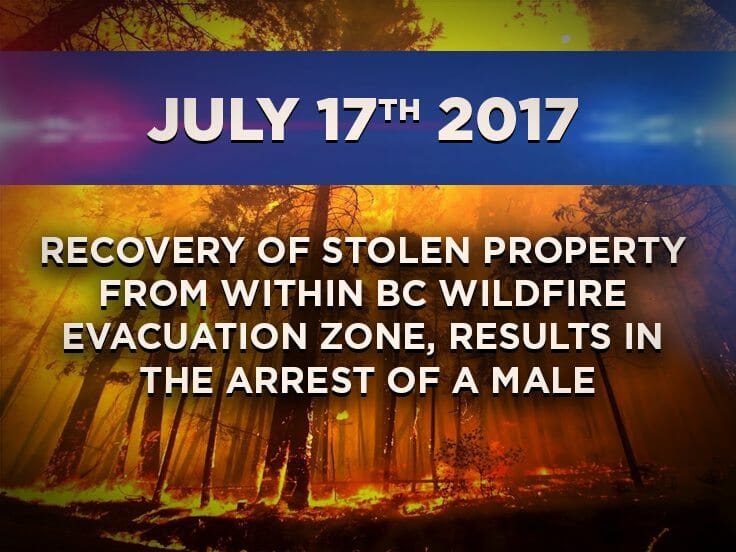 Recovery of Stolen Property from within BC Wildfire Evacuation Zone, Results in the Arrest of a Male

A male has been arrested after an investigation led by the Combined Forces Special Enforcement Unit of British Columbia resulted in the discovery of Property stolen from evacuated residents, victims of the BC Wildfire state of emergency.

Members of CFSEU-BC were engaged in proactive enforcement in the wild fire evacuated zones after receiving information of a potential prolific property offender being active within the zone. CFSEU-BC members, focused‎ investigative efforts towards this suspected offenders stash site, confirming, that stolen property was being stashed on the property.

A joint forces operation was initiated by the CFSEU-BC, in coordination and collaboration with, members of the Burnaby RCMP Strike Force, BC Conservation Service, and RCMP’s “E” Division North District Federal and Serious Organized Crime Unit to target this individual’s alleged criminal activities.

A search was conducted on a remote property in the Beaver Creek area outside of Williams Lake.

The search of the property resulted in officers finding:

Shane Brady, a 38-year old Big Lake resident, was arrested, and has been charged with Possession of Stolen Property with a value higher than $5000.

Brady is remanded in custody and his next court date is scheduled for July 20th, 2017.

This investigation was only possible, during a severely adverse time, due to the close working partnerships of the various law enforcement ‎units from around the province. CFSEU-BC would like to thank the Burnaby RCMP, BC Conservation Services, and RCMP’s E Division North District Federal and Serious Organized Crime Unit for their assistance with this investigation.