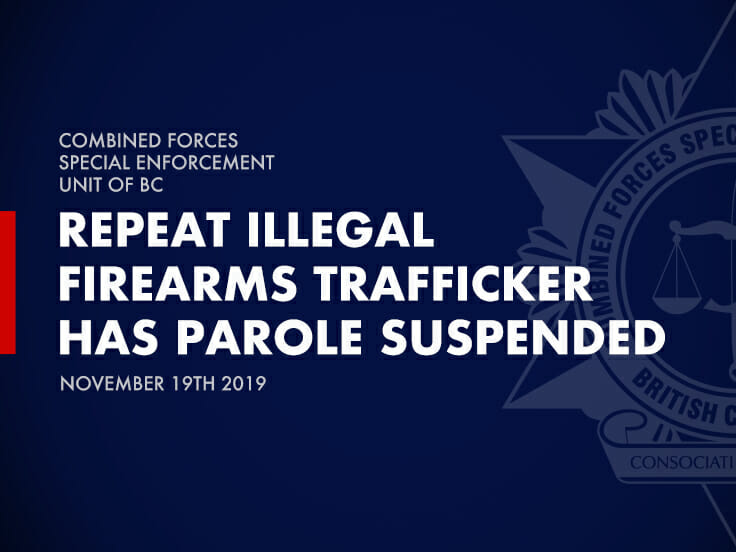 Parole has been revoked on a 40-year-old Hope man following a brief Combined Forces Special Enforcement Unit of B.C. (CFSEU-BC) investigation into his alleged criminal activities involving firearms parts. This is the second time the man has been arrested by the CFSEU-BC in the past five years.

In the first investigation, which began in May 2014, the US ATF’s Tucson office approached the CFSEU-BC requesting assistance on a firearms-related investigation involving a Canadian citizen living in British Columbia. The B.C. man was suspected of selling Glock auto sears and switches, gun parts which convert Glock pistols to fully automatic and silencers via the internet. The male, Bradley Michael Friesen, who was already on a lifetime prohibition for firearms, restricted firearms, prohibited weapons, prohibited devices, and prohibited ammunition from a 2001 conviction, was convicted on the CFSEU-BC’s charges, served five years of a 10-year sentence and was eventually released on parole which was set to expire in 2023. See initial release here: http://bit.ly/2qzlGKL

In October of this year, the CFSEU-BC received information from Canada Border Services Agency (CBSA) that they had intercepted and seized three separate packages each containing prohibited devices. The intended recipient being Bradley Michael Friesen. The CFSEU-BC engaged in an investigation into the prohibited devices seized by CBSA.

On November 14th, of this year, the CFSEU-BC, assisted by CBSA and Hope RCMP, arrested Friesen on a number of firearms-related offences and conducted a search warrant of his residence in Hope, BC.

Friesen was held in custody and transported to a correctional institution upon the suspension of his parole.

The investigation continues and currently no new Criminal Code of Canada charges have been laid at this time.

“Bradley Friesen is a well-known offender who is alleged to have showed a complete disregard for the safety of the public, and a complete disregard for the conditions placed on him upon his release into the public”, said Sergeant Brenda Winpenny, of the CFSEU-BC. “The ability of the CFSEU-BC to successfully work with our many provincial partners has taken potentially lethal items off the street and put a dangerous offender back behind bars”.

The CFSEU-BC would like to thank Canada Border Services Agency (CBSA), Correctional Service of Canada (CSC), Hope RCMP, the National Weapons Enforcement Support Team (NWEST), and the RCMP’s Lower Mainland District ERT for their assistance on this file. The excellent cooperation between the CFSEU-BC and its partners has resulted in significant seizures greatly enhancing public safety in British Columbia.