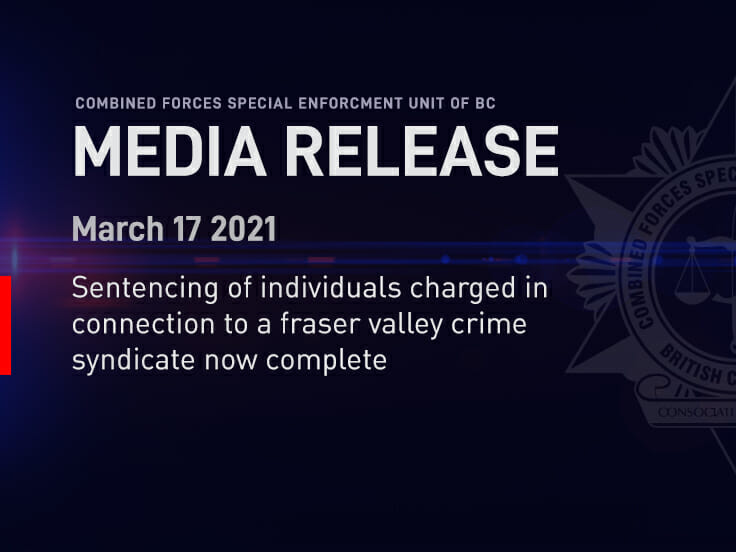 Sentencing has now been handed down to the last individual criminally charged in a 2014 Combined Forces Special Enforcement Unit of British Columbia (CFSEU-BC) investigation into the drug trafficking activities of a Fraser Valley crime cell operating primarily out of the Upper Fraser valley and B.C.’s north. The investigation resulted in the arrests of several people and the seizure of millions of dollars’ worth of illegal and potentially deadly drugs.

On November 22nd, 2019 Darcy Horvath, a 28-year-old male from Chilliwack, pleaded guilty to several drug-related and firearms offences in relation to this investigation. On February 25th, 2021 Horvath was sentenced to 4 years in jail for the drug offences and 2.5 years in jail for the firearms offences, a DNA order, 10-year firearm ban, and forfeiture of all items seized in relation to the investigation.

In November 2014, CFSEU-BC executed a search warrant on an apartment building in Chilliwack. The suite was occupied by both Mathew Thiessen and Clayton Eheler, both of whom have since been found guilty and sentenced, at the time of entry. The search resulted in the seizure of eight (8) kilograms of powder cocaine and 1 kilogram of crack cocaine; along with a large cocaine press, cutting agent and packaging materials.

In February 2015, the CFSEU-BC executed search warrants on two properties in Chilliwack and arrested four males and one female. The search of two residences and three storage lockers resulted in the seizure of eight firearms, prohibited magazines, suppressors (commonly referred to as “silencers”), and more than $200,000 in cash. Also seized was over $2 million dollars worth of drugs, which included a large quantity of the dangerous drug Fentanyl.  See original release.

In May 2015, the CFSEU-BC North District investigators observed a meeting that occurred in an isolated area just outside of Fort St John, B.C. A subsequent search of an associated vehicle resulted in the arrests of two more men connected to this investigation, and the seizure of approximately 1.8 kg of powdered cocaine, 1.6 kg of crack cocaine, and $138,000 in cash.  See original release.

In December 2015, Crown Counsel approved charges against three of the men originally arrested in connection to this investigation.  See original release.

On November 20,2019, CFSEU-BC issued a media release with an update on the sentencing of 4 individuals charged in relation to this investigation.   See original release.

“This was a complex, multi-jurisdictional investigation affecting several areas throughout the province,” says, Sergeant Brenda Winpenny, the CFSEU-BC spokesperson. “Illegal drugs, more specifically Fentanyl, is an extremely dangerous drug that is proving to have widespread consequences in our province.   This investigation is a testament to the dedication and tenacity of our investigators to hold those, who deal in drugs and are involved in criminal activity, to account and brought to justice.”