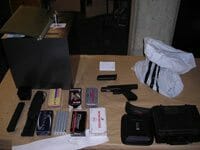 This afternoon 26-year-old Sukhveer Dhak was taken into custody without incident in the vicinity of 136 Street and 58 Avenue in Surrey by Gang Task Force investigators. 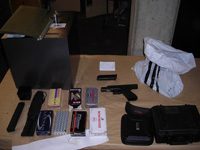 Dhak, who is well-known to police, was on bail in relation to Project Gateway, a joint drug trafficking investigation between the Delta Police Department, Surrey RCMP and the Gang task Force. His brother, Gurmit Dhak, 32, was murdered at Metro Town Mall on October 16, 2010 in what is being described as a targeted shooting.

Dhak is now charged with one count of counselling to commit an indictable offence of aggravated assault for an incident that was to occur in Surrey on November 15, 2010. The investigation is ongoing and no further details are being released at this time.

In a separate investigation, 38-year-old Christopher Chand was arrested Friday near his residence in Vancouver and is now facing three charges. Chand is well known to investigators, having been previously arrested in possession of two handguns on July 20, 2010 that were hidden in a secret compartment in his vehicle. He was on bail at the time of Friday’s arrest.

Chand is charged with one count of assault causing bodily harm in a recent incident in Burnaby. Additional charges include breach of recognizance after a third firearm was seized by Burnaby RCMP from Chand’s residence on November 29, 2010. He is also charged with theft of a motor vehicle over $5,000.

“Public safety is our primary concern” said Tom McCluskie Superintendent in Charge of the CFSEU – Gang Task Force. “The citizens of British Columbia deserve better. With these arrests we continue to send a clear message to gang members and their associates, that regardless of the offence, we will use whatever resources are at our disposal to pursue them.”