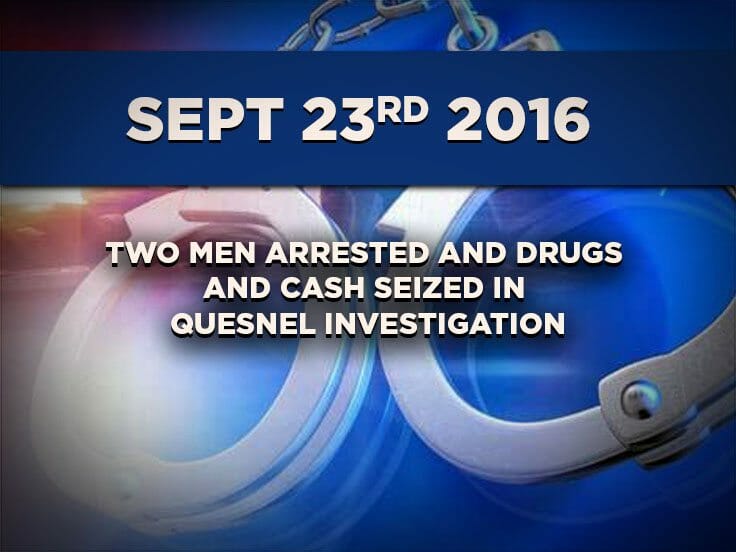 Two Quesnel men have been arrested and both drugs and cash have been seized in an investigation by the Combined Forces Special Enforcement Unit of British Columbia’s (CFSEU-BC) North District office.

In January 2016 investigators with the CFSEU-BC’s North District office received information regarding the alleged drug trafficking activities of two Quesnel residents, one a 29-year-old man and the other a 34-year-old man. An investigation was begun and between January and mid-September evidence was gathered into the alleged criminal activity of the pair.

On September 13th, both were arrested in Quesnel without incident. Search warrants were obtained for their residences and a vehicle. Discovered and seized was 728 grams of methamphetamine, approximately 2 ounces of cocaine in both powder and “crack” forms, $109,236 in Canadian currency, and drug trafficking paraphernalia, along with two knives and a machete from the vehicle. Also seized were numerous vials of various liquids suspected to be steroids. The substances have been submitted for testing and it will not be known for some time as to what the vials contain.

While neither has known gang ties or criminal records, both are known to police for past history related to alleged drug trafficking and violence. Additionally, neither is connected to any other past or ongoing CFSEU-BC investigations.

Both men have been released from custody on promises to appear, with formal charges anticipated by Crown Counsel in the coming months.

The CFSEU-BC would like to thank the Quesnel RCMP for their assistance in the investigation.