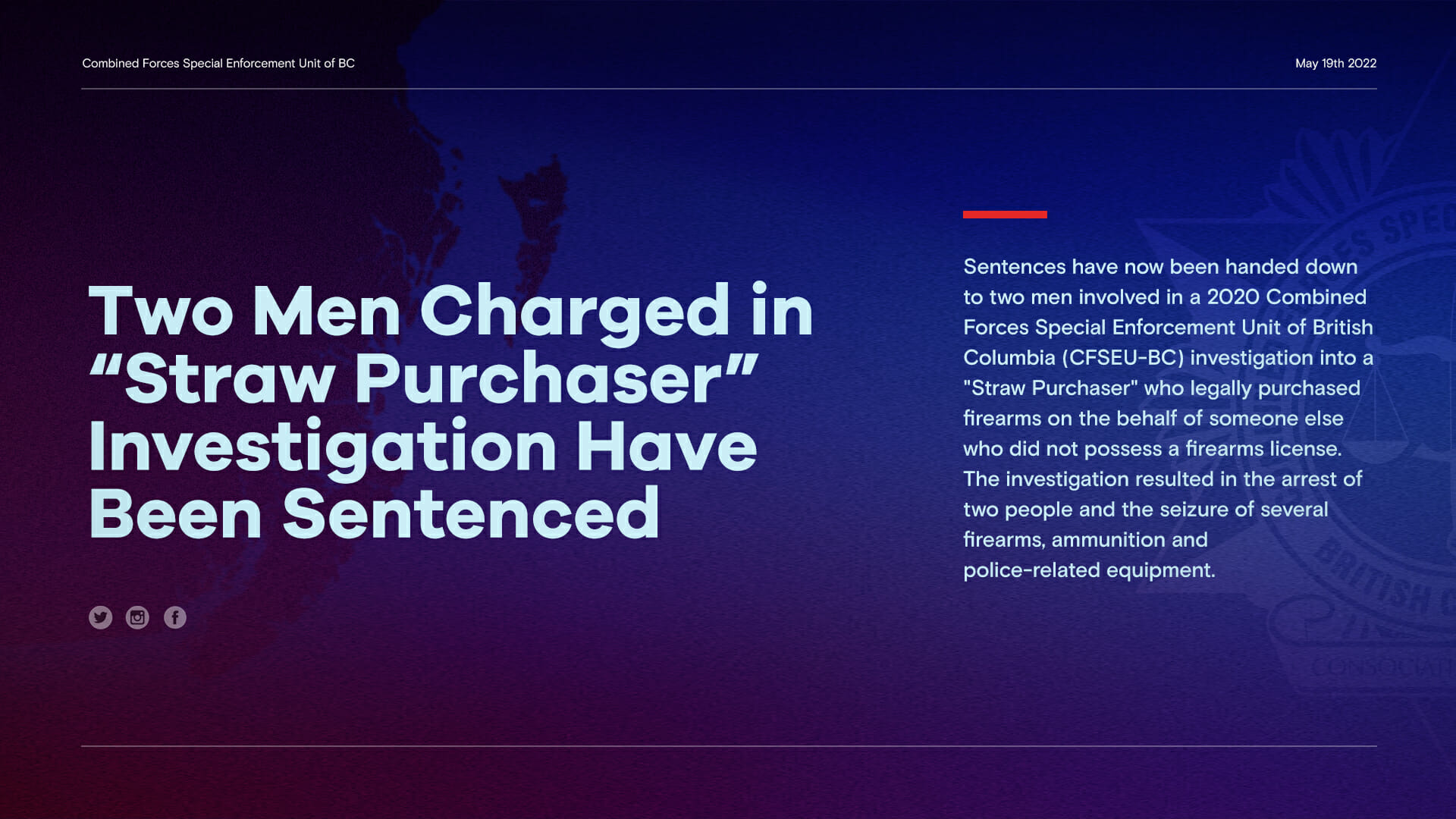 Sentences have now been handed down to two men involved in a 2020 Combined Forces Special Enforcement Unit of British Columbia (CFSEU-BC) investigation into a “Straw Purchaser” who legally purchased firearms on the behalf of someone else who did not possess a firearms license. The investigation resulted in the arrest of two people and the seizure of several firearms, ammunition and police-related equipment.

In mid-2020, investigators from CFSEU-BC commenced an investigation after learning about the suspicious purchase of a firearm by two males at a lower mainland firearms retailer. The investigation revealed that one of the men, who did not have a valid license to purchase firearms and was prohibited from possessing firearms, appeared to be directing the other male to buy a firearm and ammunition. The purchaser had also bought several other firearms in the past year.

In early September 2020, a search warrant was executed on a residence and storage locker leading to the seizure of 4 long guns, various ammunition, high capacity magazines and police-related equipment. In addition, the investigation leads to the seizure of another 3 handguns and 2 long guns.

• 1 X Trafficking a Firearm;
• 1 X Offer to Traffick a Firearm

Alex Lytle, a 31-year-old male from Port Coquitlam, was charged with 5 offences under the Criminal Code;

Convictions and sentencing concerning this investigation have now been issued:

• Alex Lytle pleaded guilty to possession of firearms, prohibited devices and ammunition while prohibited and was sentenced to 8 months in jail.
• Harjot Chahal was found guilty of the lesser offence of transferring firearms without authority and received a conditional sentence of 21 months.

“Straw purchasing undermines the integrity of the legal sale and possession of firearms, putting them in the hands of individuals who intend to use them for a criminal purpose, jeopardizing the safety of our public,” says Inspector Joel Hussey, Investigations Officer for the CFSEU-BC. “The CFSEU-BC Crime Guns Intelligence and Investigations Group (CGIIG) works closely with our policing and government partners to aggressively pursue straw purchasers holding them and the criminals they are linked to accountable and brought to justice.”