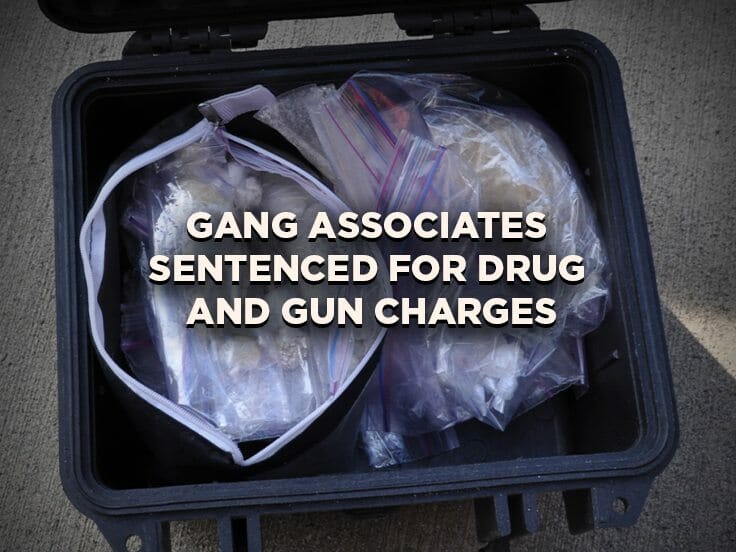 Two very well-known gang associates, with past criminal convictions, have now been sentenced for drug and firearms related charges after a 2014 Combined Forces Special Enforcement Unit of British Columbia (CFSEU-BC)-led investigation resulted in their arrests and the seizure of numerous drugs and weapons, as well as cash.

In March 2014, the CFSEU-BC had received a tip that Isaac Drennan was allegedly trafficking drugs and in possession of firearms contrary to a lifetime prohibition. In October 2014, the CFSEU-BC obtained search warrants for Drennan’s home and vehicle in Esquimalt. A search of his residence resulted in the seizure of heroin, cocaine, methamphetamine, and handguns. On October 9th, 2014, Issac Drennan was arrested in Victoria without incident. See original release.

Drennan’s associate, 34-year-old Dustin Robert Alexander Wadsworth, who is a long-time gang associate with previous drug and violence-related convictions, was charged with two counts of possession for the purpose of trafficking and one count of breach of an undertaking. Wadsworth was found guilty and sentenced to two years in jail. Wadsworth has been given credit by the courts for pre- trial custody and will serve eight more months in jail.

“The sentencing of these two well-known gangsters is a testament to the dedication of the CFSEU-BC officers and our partners who worked in collaboration to ensure drugs, weapons, and the most violent individuals are taken off the streets,” says Constable Jordan McLellan, spokesperson for the CFSEU-BC. “After all the police work is done, seeing a successful conclusion to a court trial validates all the hard work our officers do daily.”